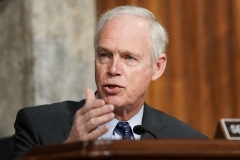 (CNS News) -- Senator Ron Johnson (R-Wisc.) sent a letter to the U.S. Capitol Police this week, seeking answers as to why its office claimed in a Jan. 7 press release that Officer Brian Sicknick died "due to injuries sustained while on-duty" -- during the Jan. 6 breach of the Capitol -- when the D.C. Medical Examiner announced on April 19 that Sicknick died of "natural causes."

In the April 22 letter to Yoganda D. Pittman, the acting chief of the U.S. Capitol Police, Sen. Johnson writes, "The recent medical examiner ruling that Officer Sicknick 'died of natural causes' raises questions regarding the USCP’s press release on January 7, 2021, that stated Officer Sicknick died from 'injuries sustained while on-duty' after 'physically engaging with protestors' at the U.S. Capitol on January 6, 2021."

The letter then notes that Franco Diaz, the Washington, D.C. chief medical examiner, announced on April 19 -- more than three months after Sicknick's death -- that Sicknick had died of natural causes, specifically two strokes, on Jan. 7. (Cause of Death -- Acute brainstem and cerebellar infarcts due to acute basilar artery thrombosis.)

Sen. Johnson mentions that the "medical examiner found that 'there was no evidence of internal or external injuries' to Officer Sicknick."

"These official findings appear to be at odds with the USCP’s January 7 statement that Officer Sicknick died 'due to injuries sustained while on-duty,'" reads the letter. "Additionally, the medical examiner’s office reportedly stated that Officer Sicknick 'collapsed 7 hours and 40 minutes after he was sprayed [with a chemical irritant], and then died nearly 24 hours after that.'"

An honor guard carries an urn with the cremated remains of US Capitol Police officer Brian Sicknick down the steps of the US Capitol building on February 3, 2021, in Washington, DC. -- The US Capitol police officer who died of natural causes after the January 6 attack on the Capitol will lie in honor at the building's Rotunda, a mark of respect rarely bestowed. (Getty Images)

"This finding raises more questions about what USCP knew and what actions USCP took to confirm certain facts regarding Officer Sicknick’s death before it released its January 7 statement," wrote Johnson.

He continued, "It remains unclear why the USCP released a statement regarding Officer Sicknick’s cause of death months before the medical examiner made an official determination. Following USCP’s claim that Officer Sicknick died 'due to injuries sustained while on-duty,' false reports about those injuries began to emerge."

"For example, the day after USCP released its statement, the New York Times reported that Officer Sicknick 'was struck by a fire extinguisher,'" wrote Johnson.  "During President Trump’s second impeachment trial, the House Democrat impeachment mangers used this false report to claim, in a trial memorandum, that the 'insurrectionists killed a Capitol Police officer by striking him in the head with a fire extinguisher.'"

The letter then presents eight questions, and several sub-questions, Sen. Johnson wants the Capitol Police office to answer. Among them are the following,

-- "What was the basis for USCP’s claim on January 7, 2021, that Officer Sicknick 'passed away due to injuries sustained while on-duty'"?

-- "When did the USCP become aware that Officer Sicknick was not struck with a fire extinguisher?"

-- "Did the House impeachment managers contact USCP in an effort to confirm Officer Sicknick’s cause of death?"

-- "[D]id USCP contact, or attempt to contact, the House impeachment managers to address the claim in their trial memorandum that stated, 'insurrectionists killed a Capitol Police officer by striking him in the head with a fire extinguisher'"?

-- "Have you directed the Office of Professional Responsibility and/or the Office of Inspector General to investigate how the January 7, 2021 USCP press release was developed and approved for release? If not, why not?"

-- "Is the USCP investigating whether members of the USCP provided inaccurate information to the New York Times in connection to its January 8, 2021 article about Officer Sicknick’s death?"

Senator Johnson instructed the Capitol Police to answer his questions no later than May 6.