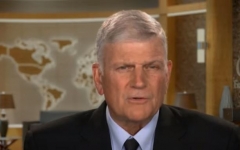 (CNS News) -- Commenting on House Speaker Nancy Pelosi's (D-Calif.) plan to "promote diversity" by eliminating the use of words like "he" or "she" or "father" from the House rules, evangelical leader Frankin Graham reminded Pelosi that God made them "male and female," and added that she was "shaking a fist in the Creator's face, trying to deny His authority."

On January 1, the House Committee on Rules announced myriad changes it wants to implement this year, including a way to "honor all gender identities by changing pronouns and familial relationships in the House rules to be gender neutral." The Office of the Whistleblower Ombudsman, for instance, would be re-titled the "Office of the Whistleblower Ombuds."

Rev. Franklin Graham, in a Jan. 3 post on Facebook said, "House Speaker Nancy Pelosi and Democratic Congressman James McGovern announced a set of changes to the House rules to enshrine what they call gender-inclusive language and stop the use of so-called non-inclusive words."

"Can you believe that they actually propose to strike the use of words, including father, mother, son, daughter, aunt, uncle, husband, and wife?" he asked.  "Yes, you read that right."

Graham continued, "I like House Minority Leader Kevin McCarthy’s response. He tweeted, 'This is stupid. Signed, -- a father, son, & brother.'"

"These proposed changes will be voted on soon after the House enters the new session which starts today," said the reverend.  "God 'created them male and female' (Genesis 1:27). This is shaking a fist in the Creator’s face, trying to deny His authority."

"If those claiming the name progressive are allowed to have their way, we won’t even recognize this nation in a very short time," said Graham.

The 117th Congress is expected to vote on these Rules changes soon; the new Congress was convened on Sunday, January 3 and is in session this week.