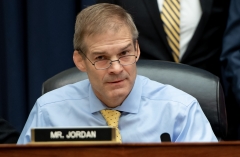 (CNS News) -- House Rep. Jim Jordan (R-Ohio), founder of the House Freedom Caucus and ranking member on the Judiciary Committee, sent a letter to the Homeland Security secretary this week, noting that "anarchists and violent left-wing extremists continue to vandalize and destroy federal property in Portland, Oregon," and demanding to know whether DHS intends to enforce federal law in Portland and what steps it is taking to do so.

"Anarchists and violent left-wing extremists continue to vandalize and destroy federal property in Portland, Oregon," states Jordan in his Mar. 29 letter to DHS Secretary Alejandro Mayorkas. "Following riots that erupted in May 2020, Portland experienced over 100 consecutive nights of violence as anarchists attacked federal courthouses, small businesses, and even police precincts."

Left-wing radicals attack the Mark O. Hatfield Courthouse, a federal building, in Portland, Oregon. Attacks on the courthouse and other federal buildings in Oregon have been occurring almost daily since May 2020. (Screenshot)

"We write to request information about the Department of Homeland Security’s (DHS) current efforts to protect federal personnel and federal property in Portland," says Jordan.

The vandalism and destruction by leftists in Portland started last summer and has not stopped. said the Republican committee member. He then reports that fencing around the Mark O. Hatfield U.S. Courthouse was taken down on March 10, 2021.

"However, on March 11, 2021, just hours after the fencing was removed, left-wing agitators attempted to force their way into the courthouse and set fire to the building," wrote Jordan. "Some individuals also burned American flags, smashed windows of local businesses, and attempted to storm a local bank. The Federal Protective Service (FPS), a component of DHS, is responsible for protecting federal facilities and the employees and visitors who use them daily."

It further states that testimony from last summer revealed that violent anarchists had "caused over 270 injuries to 140 federal law enforcement officers in Portland."

With all that in mind, Rep. Jordan requested the following information prior to April 12:

1. "Please explain the actions that DHS or FPS is currently taking to protect federal personnel and federal property in Portland, Oregon.

2. "Please explain the current efforts of DHS or FPS to prevent future damage and destruction to federal property in Portland, Oregon.

3. "Please explain whether DHS still believes that it has the authority, the mission, and the intent to enforce federal law and protect federal property in Portland, Oregon."

The letter also calls on Secretary Mayorkas to provide a staff-level briefing on what his agency is doing to combat the attacks on federal buildings and personnel in Oregon.