Gallup: Biden Job Approval Down to 43% 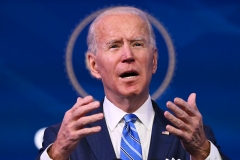 (CNS News) -- A new survey shows that President Joe Biden's job approval rating has fallen to 43%, the lowest of his presidency. Also, among independent voters, Biden's approval rating is even lower at 37%. Biden's disapproval rating among American adults is 53%.

In the September poll, Gallup asked adults living in all 50 states and the District of Columbia, "Do you approve or disapprove of the way Joe Biden is handling his job as president?"

"Biden's recent slides in approval put him in the company of Trump and Bill Clinton, whose ratings were at or below Biden's current 43% at some point in the first eight months of their presidencies," said the survey firm.

When viewed by political affiliation, 90% of Democrats approve of Biden's job performance, along with 6% of Republicans.  Among independents, 37% approve.

"A look back at comparable September approval ratings of Biden's four predecessors shows that his 37% approval rating among independents today is greater than Trump's 31% but lower than Barack Obama's 46%, George W. Bush's 44% and Clinton's 43%," reported Gallup.

"Biden's latest approval rating further cements the fact that the honeymoon phase of his presidency is behind him," said Gallup. "Political independents, who were part of the coalition that helped him defeat Trump in 2020, now largely disapprove of the job he is doing as president."

"Though Americans were generally supportive of the U.S. withdrawal of troops from Afghanistan, the chaotic and deadly way in which it was executed has played into the decrease in Biden's approval rating," said Gallup.  "So, too, has the ongoing COVID-19 pandemic."