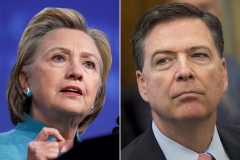 (CNS News) -- As part of its ongoing oversight of the FBI's spying operation against the 2016-17 Trump campaign, the Senate Judiciary Committee released a letter from the Director of National Intelligence on Tuesday that shows the FBI was informed in September 2016 of intelligence regarding "Hillary Clinton's approval of a plan" concerning Donald Trump and Russian hackers "hampering U.S. elections."

Christopher Steele, who was hired by Fusion GPS to compile the "dossier" on Donald Trump. The dossier was partly paid for by the Hillary Clinton campaign and the Democratic National Committee. (FNC, Screenshot.)

The American public was not told about this intelligence (until Sept. 29, 2020) and, on Wednesday, Sept. 30, ex-FBI Director James Comey testified that he was not aware of the September 7, 2016 report on Clinton, even though it was sent to him and to then-Deputy Assistant Director of Counterintelligence Peter Strzok.

Strzok, who was a senior investigator in the Clinton email scandal and the Russia collusion hoax, was fired from the FBI in August 2018 because of anti-Trump text messages he exchanged with his FBI mistress, lawyer Lisa Page. FBI Director James Comey was fired in May 2017 by President Donald Trump. Comey's deputy director, Andrew McCabe, was fired in March 2018 for leaking information to the media and for misleading fellow FBI agents, under oath, on at least three occasions, according to the report by Inspector General Michael Horowitz and as reported in The New York Times.

"In response to your request for Intelligence Community (IC) information related to the Federal Bureau of Investigation's (FBI) Crossfire Hurricane Investigation, I have declassified the following:

• In late July 2016, U.S. intelligence agencies obtained insight into Russian intelligence analysis alleging that U.S. Presidential candidate Hillary Clinton had approved a campaign plan to stir up a scandal against U.S. Presidential candidate Donald Trump by tying him to Putin and the Russians' hacking of the Democratic National Committee. The IC does not know the accuracy of this allegation or the extent to which the Russian intelligence analysis may reflect exaggeration or fabrication. [Emphasis added.]

• According to his handwritten notes, former Central Intelligence Agency Director Brennan subsequently briefed President Obama and other senior national security officials on the intelligence, including the "alleged approval by Hillary Clinton on July 26, 2016 of a proposal from one of her foreign policy advisors to vilify Donald Trump by stirring up a scandal claiming interference by Russian security services." [Emphasis added.]

As referenced in his 24 September 2020 letter to your Committee, Attorney General Barr has advised that the disclosure of this information will not interfere with ongoing Department of Justice investigations. Additional declassification and public disclosure of related intelligence remains under consideration; however, the IC welcomes the opportunity to provide a classified briefing with further detail at your convenience." [signed, John Ratcliffe]

As is well documented, the Hillary Clinton campaign and the Democratic National Committee (DNC) helped pay for the research, by Fusion GPS, which was put into the salacious "Steele dossier" and used to smear President Trump and launch the FBI "collusion" probe, and the two-year, special counsel investigation by Robert Mueller.  (Mueller was the FBI Director prior to Comey.)

The primary sub-source for ex-British spy Christopher Steele, who compiled the dossier, was "likely a Russian agent," according to the FBI and the Department of Justice. This information was not disclosed until Sept. 24. 2020.

In other words, the main source for the dossier, which was paid for by the Clinton campaign and the DNC, was "likely a Russian agent."

"This is the most stunning and damning revelation the committee has uncovered," said Chairman Graham. “To me, failure of the FBI to inform the [FISA] court that the Primary Sub-source was suspected of being a Russian agent is a breach of every duty owed by law enforcement to the judicial system.”

"It’s stunning to be told that the single individual who provided information to Christopher Steele for the Russian dossier used by the FBI on four occasions to obtain a warrant on Carter Page, an American citizen, was a suspected Russian agent years before the preparation of the dossier," added Graham.