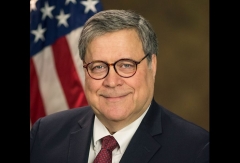 (CNS News) -- The Department of Justice (DOJ) has announced that three men on federal death row, who committed brutal murders many years ago, are scheduled to be executed by lethal injection -- one on December 11, one on Jan. 14, and one on Jan. 15.

U.S. Attorney General William Barr directed the Federal Bureau of Prisons to set the execution dates. Barr re-started the federal execution process in July this year, after a broad review of capital punishment and lethal injection drugs, ordered by President Obama in 2014, was completed.

That review has been completed, Barr told the Associated Press in July. “The Justice Department upholds the rule of law," he added, "and we owe it to the victims and their families to carry forward the sentence imposed by our justice system."

The three most recent scheduled executions were announced on Nov. 20. According to the DOJ,

"Alfred Bourgeois abused, tortured, and beat to death his young daughter.  After a paternity test identified Bourgeois as the father of a two-and-a-half-year-old girl and a court ordered that he pay child support to the mother, Bourgeois took temporary custody of his daughter and brought her with him on a trucking route.  While on the trip, Bourgeois systematically abused and tortured her — including by punching her in the face, whipping her with an electrical cord, and burning the bottom of her foot with a cigarette lighter.

"In July 2002, Bourgeois arrived at the Corpus Christi Naval Air Station for a delivery.  While backing his truck up to a loading dock, his daughter tipped over her training potty.  Bourgeois became enraged and repeatedly slammed the back of her head into the truck’s window and dashboard, killing her.

"On March 16, 2004, a jury in the U.S. District Court for the Southern District of Texas found Bourgeois guilty of murder within the special territorial jurisdiction of the United States, and unanimously recommended a death sentence, which the court imposed.  His conviction and sentence were affirmed on appeal, and his requests for collateral relief were ultimately rejected by federal courts.

"In July 2019, his execution was scheduled for Jan. 13, 2020, but legal impediments prevented the government from proceeding at that time.  Bourgeois is scheduled to be executed by lethal injection on Dec. 11, 2020, at the Federal Correctional Complex, Terre Haute, Indiana."

"Between 1989 and July 1992, Johnson and several co-conspirators, including federal death-row inmates Richard Tipton and James Roane, were partners in a large drug-trafficking conspiracy based in Richmond, Virginia," said the DOJ.  "In early 1992, Johnson went on a killing spree, shooting and killing each of the seven victims for perceived slights or rivalry in the drug trade.  Johnson shot one victim at close range after ordering him to place his head on a car steering wheel.  Johnson shot and killed another victim at the victim’s home when he failed to pay for crack cocaine — and Johnson also murdered the victim’s sister and a male acquaintance."

The DOJ continued,  "In February 1993, a jury in the U.S. District Court for the Eastern District of Virginia found Johnson guilty of numerous federal offenses, including seven counts of capital murder, and unanimously recommended seven death sentences, which the court imposed.  Johnson’s convictions and sentences were affirmed on appeal more than 24 years ago, and his initial round of collateral challenges failed 15 years ago.  (Emphasis added.)

"Johnson’s execution initially was scheduled to occur in May 2006, but a preliminary injunction prevented the government from proceeding until it was vacated this September.  Johnson is scheduled to be executed by lethal injection on Jan. 14, 2021, at the Federal Correctional Complex, Terre Haute, Indiana."

In the third case, "Dustin John Higgs kidnapped and murdered three women — Tamika Black, 19; Tanji Jackson, 21; and Mishann Chinn, 23," said the DOJ. "One evening in January 1996, Higgs and two friends drove to Washington, D.C., to pick up Black, Jackson, and Chinn, whom Higgs had invited to his apartment in Laurel, Maryland.  At the apartment, Jackson rebuffed an advance by Higgs and the women left.

"Higgs offered the women a ride back to Washington, D.C., but instead drove to a secluded area in the Patuxent National Wildlife Refuge, ordered the women out of the vehicle, gave a gun to one of the friends, and said, 'better make sure they’re dead.'  The other man shot Black and Jackson in the chest and back, and shot Chinn in the back of the head, killing all three women.

"On Oct.11, 2000, a jury in the U.S. District Court for the District of Maryland found Higgs guilty of numerous federal offenses, including three counts of first-degree premeditated murder, three counts of first-degree felony murder, and three counts of kidnapping resulting in death, and unanimously recommended nine death sentences, which the court imposed.  Higgs’ convictions and sentences were affirmed on appeal nearly 17 years ago, and his initial round of collateral challenges failed nearly eight years ago.  Higgs is scheduled to be executed on Jan. 15, 2021."

The rules for prosecuting and then potentially executing someone at the federal level (as opposed to state level) are found in the Federal Death Penalty Act.

On June 15, 2020, when the DOJ announced the scheduled executions of four federal inmates who had murdered children, Attorney General Barr said, “The American people, acting through Congress and Presidents of both political parties, have long instructed that defendants convicted of the most heinous crimes should be subject to a sentence of death."

“The four murderers whose executions are scheduled today have received full and fair proceedings under our Constitution and laws," said Barr.  "We owe it to the victims of these horrific crimes, and to the families left behind, to carry forward the sentence imposed by our justice system.”

In a Sept. 24, 1991 commentary for The New York Times, when he was deputy attorney general under President George H.W. Bush, Barr wrote, "We need a death penalty to deter and punish the most heinous Federal crimes such as terrorist killings. That penalty would send a message to drug dealers and gangs."

As for lengthy appeals and delayed justice, Barr wrote, “This lack of finality devastates the criminal justice system. It diminishes the deterrent effect of state criminal laws, saps state prosecutorial resources and continually reopens the wounds of victims and survivors."