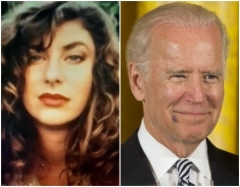 (CNSNews.com) – Although Tara Reade, a former staff assistant to Sen. Joe Biden (D), has told several media outlets that Biden sexually assaulted her in 1993 on Capitol Hill, many of the top Democrats in Congress who vigorously support the #MeToo movement and who defended Christine Blasey Ford’s allegations against Brett Kavanaugh, are not saying whether they believe Tara Reade. Nor are they saying whether they don’t believe her.

The press office for House Speaker Nancy Pelosi (D-Calif.) was the only office to respond. In an email, the office referred CNSNews to an April 17 MSNBC interview, in which Pelosi said she was satisfied with Biden's denial of the alleged assault.

On the program, Ari Melber said,  "Before I lose you, a final question on a different issue.  As you know, there was an accusation of misconduct against Joe Biden.  He has publicly denied it.  He is the Democratic nominee.  Are you satisfied with his answer?"

Speaker Pelosi said, "Yes, I am.  I am very much involved in this issue.  I always want to give the opportunity that women deserve to be heard.  I am satisfied with his answer, yes." Pelosi has endorsed Biden for president in the 2020 race.

Former Vice President Joe Biden (D-Del.) has not yet been asked by the media about Reade's allegations.

However, Kate Bedingfield, Biden’s communications director, said in March, "Women have a right to tell their story, and reporters have an obligation to rigorously vet those claims. We encourage them to do so, because these accusations are false."

The Wall Street Journal reported on April 28, “In the last month, he [Biden] has participated in about 20 television interviews as well as podcasts and virtual fundraisers. He hasn’t been asked about Ms. Reade’s claims at any of those events. Mr. Biden’s campaign declined to make him available for an interview for this article.”

As reported by Ryan Grim in The Intercept, “Reade’s assault allegation, which became public last month [in March], involves an interaction in the spring of 1993. She said that she was sent by her manager to bring a gym bag to Biden, and they met in a hallway of the Russell Senate Office Building, in a tucked away corner. Before she knew it, he pressed her up against the wall, forcibly kissed her, and put a hand each up her blouse and skirt, penetrating her with his fingers.”

Reade also told Democracy Now! that she started to pull away and then Biden pulled back and said, “'Come on, man, I heard you liked me.’ He was angry. It was like a tight voice. … He was younger, he was my dad’s age at the time [51] and very strong. He looked insulted and angry, and I remember feeling like I had done something wrong when he said that statement. And then, I was standing there when he said, he was still near me, he said, he pointed his finger and said, ‘You’re nothing to me! You’re nothing!’ And he walked away.”

“The next thing I remember, it was that night, talking to my mom,” said Reade. “And she was like, ‘You need to file a police report, it’s a sexual assault.’ … I was just trying to get over the shock of it because I looked up to him. He’s supposed to be a champion of women. And I was so thrilled to be in that office and so honored. It shattered my life and changed the trajectory of my whole career and life. I lost my job after I complained, and I was fired.”

Reade has said she told her mother, Jeanette Altimus, and brother, Colin Moulton, as well as a family friend, who has asked to remain anonymous, about the incident with Biden.

Also, in the mid-1990s, Reade spoke with a neighbor, Lynda Lacasse, and a friend, Lorraine Sanchez, about the alleged incident. Lacasse and Sanchez confirmed to Business Insider that Reade had spoken with them about the harassment/assault.

Lacasse told Business Insider, “I remember her [Reade] saying, here was this person that she was working for and she idolized him. And he kind of put her up against a wall. And he put his hand up her skirt and he put his fingers inside her. She felt like she was assaulted, and she really didn't feel there was anything she could do."

"I have to support her just because that's what happened," LaCasse, a liberal Democrat, told The Insider. "We need to stand up and tell the truth."

Colin Moulton and the anonymous friend also confirmed to The Intercept, a liberal publication, that Reade had spoken with them about what happened. Reade’s mother passed away in 2016.

However, Reade told The Intercept's Ryan Grim that she recalled her mother had called into CNN’s Larry King Show in 1993 and asked the panelists what a young woman should do if she were having "problems" with a "prominent senator."

The Media Research Center pulled the video of that Aug. 11, 1993 Larry King Live show from its archive and posted it online – CNN did not post it. Reade says the voice on the phone call is her mother’s. In addition, the call was identified by Larry King as coming from San Luis Obispo, Calif., which is where Reade’s mother lived at the time.

The transcript of that exchange is as follows,

Caller: Yes, hello. I’m wondering what a staffer would do besides go to the press in Washington? My daughter has just left there, after working for a prominent senator, and could not get through with her problems at all, and the only thing she could have done was go to the press, and she chose not to do it out of respect for him.

King: In other words, she had a story to tell but, out of respect for the person she worked for, she didn’t tell it?

Commenting on CNN’s decision not to pursue its own story about the video clip and the phone call, MRC President Brent Bozell said, “First it was omission, now it is outright collusion with the Biden presidential campaign. First, CNN kept hidden their own footage that links Biden to a sexual assault. CNN would have succeeded in keeping that hidden but for the MRC that also had, and released, the footage.”

“After being exposed and forced to report on the story they had for years, within a day CNN has now taken it down again, trying to expunge the evidence from their online platforms,” said Bozell. “This is not China, or North Korea. In the United States, a ‘news’ network doesn't work overtime to keep the truth from the American people -- unless it's doing the bidding of the Biden presidential campaign.”

Despite Reade’s allegation and the contemporaneous witnesses who say she spoke with them about the assault, not one leading Democrat in Congress has said they believe her.

CNSNews sent three emails to the press secretaries of 12 Democrats in the Senate and House, and made three phone calls to each of their offices. CNS News asked the question, “Do you believe Tara Reade’s allegations, yes or no?”

Only one Democrat responded -- Pelosi.

On Tuesday, April 28, Sen. Gillbrand, who was a vocal defender of Christine Blasey Ford during the Brett Kavanaugh hearings, said she was standing by Joe Biden.

“So when we say believe women, it’s for this explicit intention of making sure there’s space for all women to come forward to speak their truth, to be heard,” said Gillibrand at a press conference. “And in this allegation, that is what Tara Reade has done. She has come forward, she has spoken, and they have done an investigation in several outlets.”

Again, although Biden has not been asked directly by the media about the allegations, his communications director, Kate Bedingfield, has said, “What is clear about this claim: It is untrue. This absolutely did not happen.”

As for the liberal media, the MRC noted that between March 25 and April 27, “ABC, NBC, CNN and MSNBC all invited Biden on their airwaves for interviews, but they refused to confront him even once about these allegations. Out of 77 questions, not a single one asked the former Senator and Vice President about Reade's charges.” (Emphasis added.)

Disclosure:  The Media Research Center is the parent company of CNSNews.com.)