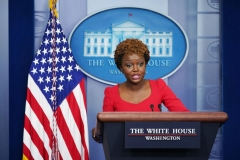 White House Deputy Press Secretary Karine Jean-Pierre speaks during the daily briefing in the Brady Briefing Room of the White House in Washington, DC on November 9, 2021. (Photo by MANDEL NGAN/AFP via Getty Images)

(CNSNews.com) - The White House on Tuesday said that it is “closely and directly monitoring” gas prices after a group of 11 Democrats sent a letter to President Joe Biden asking him to explore options like banning crude oil exports and tapping the Strategic Petroleum Reserve to lower prices at the pump.

When asked whether the president is considering a ban on oil exports, White House Deputy Press Secretary Karine Jean-Pierre said,”The administration is closely — is closely and directly monitoring the situation. As we’ve said before, we’ve communicated with FTC — right? — to crack down on illegal pricing and are engaging with countries and entities around the OPEC Plus on increasing supply.

“We’re looking at all the tools in our arsenal. We’re very concerned about the impact of high energy prices on consumers, especially as we enter the colder months, and so, we’re continuing, like I said, to monitor the situation, and we’re going to do everything that we can from here to address,” she said.

Although Jean-Pierre said she doesn’t “have anything specific” to report, the deputy press secretary said, “I can just tell you what we’ve been doing here, which is calling on OPEC to increase their supply.

“We’ve been looking at, you know, the — monitoring the situation. I mean, one of the reasons why the President said no to paying for a Bipartisan Infrastructure bill with a gas tax is because of this, and so, we’re going to continue to just keep an eye on this, and like I said, we’re going — you know, we have tools in our toolbelts that we can potentially address this with,” she said.

“So, the only other tool that we’ve heard mentioned, though, from the administration is maybe tapping the Strategic Petroleum Reserve. We haven’t really heard anything else specific that the President is considering. Does that — is that because he feels that his hands are tied when it comes to what he can actually do to try to combat high gas prices?” a reporter asked.

“No, I wouldn’t read it — read it that way.  We just don’t have anything right now to announce, but like I said, we’re monitoring this, and we’re — we’re working through what is it that — how we can actually address this,” Jean-Pierre said.