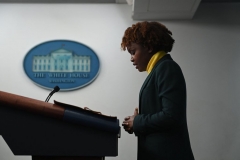 (CNSNews.com) - The White House dodged a question Monday about the Durham investigation into the FBI’s probe of Russian interference in the 2016 election, specifically allegations that a tech executive exploited access to the White House server to find incriminating evidence against former President Trump.

The executive reportedly identified in media reports as Rodney Joffe is referred to as Tech Executive 1 in a court filing on Friday by Special Counsel John Durham. He is charged with one count of “making a materially false statement to the FBI, in violation of Title 18, United States Code, Section 1001 (the ‘Indictment’).”

The Indictment also alleges that, beginning in approximately July 2016, Tech Executive-1 had worked with the defendant, a U.S. investigative firm retained by Law Firm-1 on behalf of the Clinton Campaign, numerous cyber researchers, and employees at multiple Internet companies to assemble the purported data and white papers. In connection with these efforts, Tech Executive-1 exploited his access to non-public and/or proprietary Internet data. Tech Executive-1 also enlisted the assistance of researchers at a U.S.-based university who were receiving and analyzing large amounts of Internet data in connection with a pending federal government cybersecurity research contract. Tech Executive-1 tasked these researchers to mine Internet data to establish “an inference” and “narrative” tying then-candidate Trump to Russia. In doing so, Tech Executive-1 indicated that he was seeking to please certain “VIPs,” referring to individuals at Law Firm-1 and the Clinton Campaign.

The Government’s evidence at trial will also establish that among the Internet data Tech Executive-1 and his associates exploited was domain name system (“DNS”) Internet traffic pertaining to (i) a particular healthcare provider, (ii) Trump Tower, (iii) Donald Trump’s Central Park West apartment building, and (iv) the Executive Office of the President of the United States (“EOP”). (Tech Executive-1’s employer, Internet Company-1, had come to access and maintain dedicated servers for the EOP as part of a sensitive arrangement whereby it provided DNS resolution services to the EOP. Tech Executive-1 and his associates exploited this arrangement by mining the EOP’s DNS traffic and other data for the purpose of gathering derogatory information about Donald Trump.)

“This news about the Durham investigation: Does the president have any concerns about a candidate for president using computer experts to infiltrate computer systems of competing candidates, or even the president-elect to — for the goal of creating a narrative?” Fox News White House Correspondent Jacqui Heinrich asked.

“That’s something I can’t speak to from this podium, so I refer you to the Department of Justice,” White House Principal Deputy Press Secretary Karine Jean-Pierre said.

HEINRICH: Is what being described in that report — monitoring Internet traffic — is that spying?

JEAN-PIERRE: Again, I can’t speak to that report. I refer you to the Department of Justice.

HEINRICH: Generally speaking though, would monitoring Internet traffic be —

JEAN-PIERRE: Jacqui, my answer is not going to change. I refer you to the Department of Justice. I can’t speak to that from here.