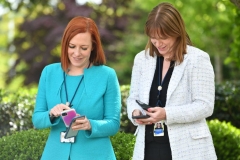 White House Press Secretary Jen Psaki (L) and White House Communications Director Kate Bedingfield (R) not wearing masks after listening to US President Joe Biden deliver remarks on Covid-19 response and the vaccination program, from the Rose Garden of the White House, Washington, DC on May 13, 2021. (Photo by NICHOLAS KAMM/AFP via Getty Images)

(CNSNews.com) – The White House denied on Friday that politics was behind the Centers for Disease Control and Prevention’s (CDC) decision to update its guidance on mask-wearing indoors for political reasons.

“I know that Dr. Walensky did an extensive number of interviews yesterday to answer exactly that question, but as we’ve talked in here quite a bit about, the CDC – not just Dr. Walensky, but her entire team of health and medical experts - are constantly reviewing the data to ensure that they can provide accurate and up-to-date guidance to the American people, so based on three factors as she talked about yesterday,” Psaki said.

“Vaccines work in the real world. We’ve seen a lot of studies done on that, including internally in the federal government. Vaccines stand up to the variants, which at various times has been a concern about the need to continue to mask even as you—after you’re vaccinated, and vaccinated people are less likely to transmit the virus. That’s how they came to the decision, and that’s what she conveyed yesterday when she announced the decision,” the press secretary said.

“Just looking at the CDC’s website on the way up here, only 45.6 percent of U.S. adults have been fully vaccinated as of yesterday. Only 58.9 percent of the adult population has at least one dose, so what happened to President Biden saying in March that he thought lifting mask mandates before every adult American goes and gets a shot is Neanderthal thinking?” Doocy asked.

“First, let me say that the president, our north star, has been listening to the guidance of our health and medical experts and teams, and that’s exactly what we’re doing in this case, and just to reiterate, the CDC, the doctors and medical experts there were the ones who determined what this guidance would be based on their own data and what the timeline would be,” the press secretary said.

“That was not a decision directed by, made by the White House. The White House was informed of that decision just to give people assurance of that,” she added.

“So does the president still think that these red state governors who were a little bit ahead of the federal government in lifting the mask mandates had Neanderthal thinking?” Doocy asked.

“Again, I would say that even with this guidance that’s out there, the guidance is not telling states and localities exactly how they should implement,” the press secretary said.

“As you know, there are some localities and states in the country that have higher rates of vaccination than others, some communities that have higher rates of vaccination than others, and we even know as this is being implemented but different localities, businesses will implement it in the way that they feel will help ensure their community is safe, but I know I am reassured by listening to the … guidance of health and medical experts, not political decision-making. So that’s the point that we’re at now,” Psaki said.

Doocy pointed out that White House senior advisor for COVID response Andy Slavitt said on Friday morning “that the White House found out the mask guidance was going to change at 9pm the night before.”

“Were you guys surprised that in the 9 o’clock hour at 9:25, the CDC director was on CNN saying that the science wasn’t there yet?” Doocy asked.

“I didn’t watch that interview,” the press secretary said. “I can just tell you that a small number of—that they—we were informed the night before that the guidance, that they’d made a decision about the guidance. They planned to announce it the next day, and even here, only a small number of people knew that that announcement was going to be made.

“Hence, if you were here yesterday, you saw kind of shock of people taking off their masks around the building, but you know it may have been at the point where they were not ready to make the announcement yet, but I point you to CDC on their specific rollout plan,” she added.

As to whether the president plans to rescind his executive order mandating masks on federal property, Psaki said, “The CDC guidelines were just put out as you all know yesterday. They were determined by, decided by what they were to be, what the specifics were, but also the timeline by the CDC, not by us, not by the White House, not by the president to be very clear, and we’re working to implement those across the government.

“As you’ve seen yesterday, as soon as the guidelines came out, we got a note that came across our emails that said, you don’t need to wear masks here anymore. We talked to the White House Correspondents Association immediately and said, reporters don’t need to wear masks anymore unless they choose to, same for the American people of course. So we’re working to implement,” she said.

“It may take a couple of days, but certainly I would expect on federal lands, federal properties that the guidelines will be the guide,” the press secretary added.

When asked whether the White House is discussing whether to change the federal transportation mask mandate at this point, Psaki said, “Well first I would say we’re continuing to review, our health and medical experts are continuing to review the applicability and what’s, what is safe to do based on these guidelines, based on their new data, but I don’t have anything to preview for you on that front.

“We’ll continue to look to them for guidance on what is safe on an airplane or a train or anything like that,” she said.
Psaki also said that the there’s no change to the administration’s decision not to pursue a federal vaccine passport policy.

“There’s no change to it. We are not currently considering federal mandates. We are instead focused on ensuring all Americans understand the benefits of vaccination, that we are answering their questions, and that they have access to get vaccinated,” she said.

“We also understand that private sector companies may decide that they want to have requirements. That’s up to them to make that determination. If you are running a stadium, if you are a sports team or something like that, you have different considerations. We fully respect that, but we have no plans to change our approach from the federal government,” the press secretary added.