WH: Trump 'Has Condemned White Supremacy More Than Any President in Modern History’ 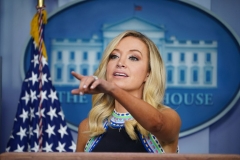 White House Press Secretary Kayleigh McEnany takes a question during a press briefings on September 24, 2020, in the Brady Briefing Room of the White House in Washington, DC. (Photo by MANDEL NGAN/AFP via Getty Images)

(CNSNews.com) - White House Press Secretary Kayleigh McEnany said Thursday that President Donald Trump has condemned white supremacy multiple times, and the president wants to prosecute the KKK as domestic terrorists, even saying that lynching should be a national hate crime.

ROBERTS: If I could start off, I would like to ask you for a definitive and declarative statement without ambiguity or deflection. As the person who speaks for the president, does the president denounce white supremacism and groups that espouse it in all its forms.

ROBERTS: But just to clear it up this morning can you naming it, make a declarative statement that the president has denounced it--

MCENANY: I just did. The president has denounced this repeatedly.

ROBERTS: You read a bunch of quotes from the past.

MCENANY: The president was asked this. You’re contriving a story line and narrative.

ROBERTS: No, I’m not. I’m just asking you to put this to rest.

MCENANY: I just did. I read you all the quotes, and if you need to see them in writing, I will put them in an email.

ROBERTS: You read me past quotes. Can you right now denounce white supremacy and the groups that espouse it?

MCENANY: I just did. The president has denounced white supremacy, the KKK and hate groups in all forms. He signed a resolution to that effect. The president just last week - perhaps you all weren’t covering it - but just last week, expressed his desire to see the KKK prosecuted as domestic terrorists. This president has advocated for the death penalty for a white supremacist, the first federal execution in 17 years. His record on this is unmistakable and it’s shameful that the media refuses to cover it.

CBS News White House Correspondent Paula Reid asked McEnany whether the White House agrees with the assessment by the FBI and DHS that racially motivated violent extremism is one of the deadly threats that we face in the U.S., and also what the White House is doing to combat the threat.

“The president has done quite a bit to combat the threat. First of all last week, he also, in addition to saying he wants to prosecute the KKK as domestic terrorists, he said that lynching should be a national hate crime. Again, I think there’s no stronger signal that you can send than advocating for the execution of a white supremacist - the first time there’s been a federal execution in 17 years. He’s been unmistakeable,” McEnany said.

Reid said that Trump’s record is mixed on the issue of white supremacy.

“His record is not mixed in the slightest. When you go back in history you can see that Jesse Jackson has praised the president as someone who’s served underserved communities. This president with Mar-a-Lago - it was the first Palm Beach club open to African-Americans and Jews, and in fact--” McEnany said.

“His record was mixed. He was not praised on the issue of white supremacy,” Reid said.

Reid kept interrupting McEnany when she tried to respond, so McEnany called Reid out for her behavior and took the media to task for criticizing the president for interrupting Democratic presidential nominee Joe Biden during the first presidential debate but then doing the same thing to the press secretary during the briefing.

“You need to let me finish. It is quite funny that the media goes haywire about interrupting in debates and then chooses to pursue that very same tactic themselves. This is a White House briefing. You ask a question and you give me time to answer,” McEnany said.