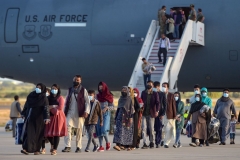 Refugees disembark from a US air force aircraft after an evacuation flight from Kabul at the Rota naval base in Rota, southern Spain, on August 31, 2021. (Photo by CRISTINA QUICLER/AFP via Getty Images)

(CNSNews.com) - The White House announced Thursday that a plane carrying U.S. citizens left Afghanistan and landed in Qatar with the cooperation of the Taliban.

Horne confirmed that the flight landed safely in Qatar. She expressed gratitude for “the continued efforts of Qatar in facilitating operations at HKIA and helping to ensure the safety of these charter flights.”

“We have been working intensely across the U.S. government to ensure the accuracy of the manifest and the safe departure and transit of the aircraft, and today’s safe flight is the result of careful and hard diplomacy and engagement,” she said in the statement.

“The Taliban have been cooperative in facilitating the departure of American citizens and lawful permanent residents on charter flights from HKIA. They have shown flexibility, and they have been businesslike and professional in our dealings with them in this effort. This is a positive first step,” Horne said.

PSAKI: Well, I would note that in that statement, what we were announcing was the fact that a Qatari airlines flight successfully landed in Qatar with American citizens, legal permanent residents, and Afghans on board who joined us in our fight over the last several years.

We wanted to note that the Taliban was cooperative in facilitating the departure of these American citizens and legal permanent presidents from HKIA.

DOOCY: But you’re saying the Taliban is “businesslike and professional.” Their Interior Minister has an FBI Wanted poster. He’s got a $10 million bounty on his head. That’s — what’s the business?

PSAKI: We are here to celebrate the return of American citizens who wanted to leave Afghanistan, of legal permanent residents, of Afghans who fought by our side, to Qatar — successfully on a Qatari airlines flight.

And in order to get those people out, we had to work with some members of the Taliban to press them and to work in a businesslike manner to get them out. That is what we were stating in the statement.

DOOCY: And in that statement, it says, “This is a positive first step.” Towards what?

PSAKI: Towards getting additional people out who want to leave Afghanistan.