WH: Republicans ‘Faking Outrage’ Even Though They Defended Biden’s Actions 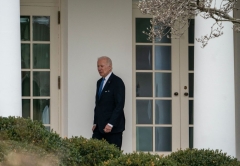 President Joe Biden walks to the Oval Office after returning to White House in Washington, DC on January 23, 2023. (Photo by ANDREW CABALLERO-REYNOLDS/AFP via Getty Images)

(CNSNews.com) - While President Biden “has been fully cooperating” and “acting responsibly” when it comes to the investigation into his mishandling of classified documents, Republicans have “decided it’s time for more political stunts and theater,” White House spokesperson Ian Sams said on Monday.

“They’re faking outrage, even though they defended the former president’s actions. Just look at the Chairman of the House Oversight Committee. Yesterday, he actually told Fox News that he believed President Biden, quote, ‘probably had no knowledge of it,’ and then, on Sunday, he told CNN, quote, ‘At the end of the day, my biggest concern isn’t the classified documents, to be honest with you,’” Sams said.

“Think about that for a second. He’s on TV openly admitting that he doesn’t care about the underlying issue and doesn’t even think that President Biden has knowledge about it, and in case there is any doubt that these House Republicans and their outrage is all pure theater, just look at how he responded to the former president’s handling of classified information,” he said.

“He said last year — and this is a direct quote — it, quote, ‘didn’t amount to a hill of beans,’ and that, quote, it ‘will not be a priority’ in terms of an investigation. So it’s important to really understand the distinction here. President Biden is committed to doing the responsible thing and handling this appropriately,” Sams said.

“His team acted promptly to disclose information to the proper authorities and is cooperating fully, and while we’re limited in what we can say during an ongoing DOJ inquiry, we are providing as much information publicly as is appropriate, given that investigation,” the spokesman said.

“When it comes to Congress, we intend to review and respond to oversight inquiries in good faith, but we also expect members of Congress to show the same good faith. House Republicans lose credibility when they engage in fake outrage about an issue that they’re clearly pursuing only for partisan gain,” he said.