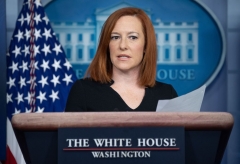 (CNSNews.com) - The White House is sticking up for green energy, saying that it wasn’t to blame for leaving millions of Texans in the dark this week.

At Wednesday’s White House press briefing, White House Press Secretary Jen Psaki said it was failures in coal and natural gas that is to blame for the state’s power outages, not wind and solar despite the state’s wind turbines freezing over.

“About a decade ago, federal regulators suggested — they urged Texas to weatherize its power grid. That largely did not happen, or it certainly didn’t happen enough, and, of course, it was only a suggestion because Texas is not part of the national grid,” a reporter told Psaki, adding that former Energy Secretary and former Texas Gov. Rick Perry said that “Texans would rather endure days of blackouts than submit to federal regulation.”

“Is the president willing to leave 30 million Texans off of the national grid?” the reporter asked.

“There’s a lot packed into that question. I will do my best to answer it. Let me first say that building resilient and sustainable infrastructure that can withstand extreme weather and a changing climate will play an integral role in creating millions of good-paying union jobs, creating a clean energy economy, and meeting the president’s goal of reaching a net-zero emissions future by 2050, and also will be beneficial in future storms,” Psaki said.

“I will say that there has been some inaccurate accusations out there — I’m not sure if former Secretary Perry made these — but that it was the — that suggested that renewables caused failures in Texas’s power grid, and actually, numerous reports have actually shown the contrary: that it was failures in coal and natural gas that contributed to the state’s power shortages,” she said.

“And officials at the Electric Reliability Council of Texas, which operates the state’s power grid, have gone so far as to say that failures in wind and solar were the least significant factors in the blackout, and I know that wasn’t exactly your question, but I just wanted to convey that since there’s been a lot of confusion about it,” Psaki added.

“Beyond that — about the power grid — I would certainly send you to the Department of Energy for any further comment on that particular line of questioning,” the press secretary said.