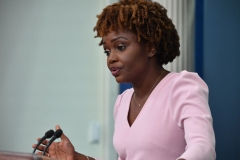 During a gaggle on board Air Force One en route to Madrid, Spain, the press secretary was asked, “So on the Roe v. Wade situation, there’s — you know, have been calls for — I think we talked about this the other day about, you know, building some kind of facilities on federal lands. Are you any further along in terms of exploring those options? And would it be a possibility to come to some agreement with Tribes to use Tribal lands?”

“So with this proposal — we understand the proposal is well intentioned, but here’s the thing: It could actually put women and providers at risk, and importantly, in states where abortion is now illegal, women and providers who are not federal employees — as you look at the federal lands — could be — potentially be prosecuted. and so, this is — as we understand why they would put forward this proposal, there’s actually dangerous ramifications to doing this,” Jean-Pierre said.

When asked to clarify if that’s a no and that the Biden administration can’t offer sanctuary for abortion on federal property, the press secretary said, “So I don’t have any more to share on that. I — you know, this is — as we have mentioned, we’re looking at some — we’re looking at an array of other options.

“We mentioned — the president on Friday, as you know, spoke to two first steps — concrete first steps that we believe will help women get the help that they need to make their decisions for themselves, the he- — for their healthcare,” Jean-Pierre said.

“I just don’t have anything else to share — anything specific on that, but wanted to lay out what that proposal actually meant and so that you have the full breadth of the — of the meaning of what it would be to do that,” she said.

As CNSNews.com previously reported, Vice President Kamala Harris was asked on Monday about such a proposal, and she said, “I think that what is most important right now is that we ensure that the restrictions that the states are trying to put up, that would prohibit a woman from exercising what we still maintain is her right, that we do everything we can to empower women to not only seek but to receive the care where it is available.”

When asked if federal land is one of those options, the vice president said, “I mean, it's not right now what we're discussing, but I will say that when I think about what is happening in terms of the states, we have to also recognize, Dana, that we are 130 odd days away from an election, which is going to include Senate races, right? Part of the issue here is that the court is acting.”

“Now Congress needs to act, but we - if you count the votes - don't appear to have the votes in the Senate. There's an election happening in 130-odd days. I’m taking– for example, thinking of a Senate race in Georgia or North Carolina. There's a Senate race coming up just in a couple weeks in Colorado,” Harris said.