WH Press Secretary: ‘Our Choice Was Brittney or No One at All’ 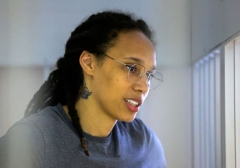 “President Biden keeps his promises, and today he fulfilled a deeply important promise to bring Brittney Griner home to a family that loves her, a team that misses her, and a country that has marveled at her strength and courage,” Jean-Pierre said.

“Brittney’s safe return home is the product of months and months of painstaking negotiations that were the culmination of extraordinary efforts across the U.S. government. Officials from the White House, the State Department, and across the administration worked tirelessly and relentlessly to see this moment through,” she said.

“As the Secretary of State said publicly in July, we have been engaging in intense negotiations with Russia, pursuing many different avenues over the course of the last six months to secure Brittney’s release, and we know Brittney fought tirelessly too,” the press secretary said.

“Throughout her ordeal, we saw Brittney — a two-time Olympic Gold medalist for Team USA — demonstrate strength, courage, and dignity. As the president said this morning, she represents the best of America,” Jean-Pierre added.

The White House was unsuccessful, however, at securing the release of former Marine Paul Whelan, who was accused by Russians of taking part in an intelligence operation and sentenced to 16 years in June 2020.

The press secretary said that the administration hasn’t given up on bringing Whelan home.

While we’re celebrating Brittney’s return home today, we have also continued to be in touch with the Whelan family for whom this news brings mixed emotions.

In recent weeks, it became clear that while Russians were willing to reach an agreement to secure Brittney’s release, they continue to treat Paul Whelan differently, given the nature of the totali- — totally illegitimate charges they have levied against Paul. Unfortunately, the choice became to either bring Brittney home or no one.

As the president said this morning, he will — he will never stop working to secure Paul’s release and return home, and he will not give up.

On a personal note, Brittney is more than an athlete, more than an Olympi- — Olympian. She is an important role model and inspiration to millions of Americans, particularly the LGBTQI+ Americans and women of color. She should never have been detained by Russia, and we are — I am — deeply proud of the work that the president has done, this administration has done to get her home.

Fox News White House Correspondent Peter Doocy asked why the Russians got a better deal in the prisoner swap.

JEAN-PIERRE: Look, you know, I’ve talked about this, and I’ll say this again. Here were our choices. Our choices was: Brittney or no one at all. Bring home one American or no American at all, and that’s — that’s —

DOOCY: And they give up a professional athlete. We gave up a prolific arms dealer who was convicted of trying to kill Americans, who is called the “Merchant of Death.”

JEAN-PIERRE: The professional athlete is also an American citizen — so let’s not forget that — who deserved —

DOOCY: And Paul Whelan is an American citizen. So we could do this all day.

JEAN-PIERRE: And so — and — and I’ve explained how the Russians have illegally treated — totally illegitimately treated his situation. I’ve been very clear on that. We’ve laid that all — we laid that out for you, and, again, the president felt that this was an opportunity to bring Britney home.

DOOCY: How can you say that he’s going to do everything that he can if he said, just a few days ago, he’s not going to call up Vladimir Putin until further notice?

So, we were — we have been able to do this, and the president has been committed to getting this done. We are still working to secure Paul Whelan. At this time, we were not able to make that happen. But that does not stop us. That will not stop us in making sure that Paul returns back home safely to his family.