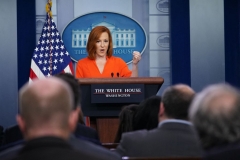 White House Press Secretary Jen Psaki speaks during the daily briefing in the Brady Briefing Room of the White House in Washington, DC on June 21, 2021. (Photo by MANDEL NGAN/AFP via Getty Images)

(CNSNews.com) - White House Press Jen Psaki said Monday that Russian President Vladimir Putin didn’t need a list to know what is considered “critical infrastructure” in the United States, and President Joe Biden made it clear in their meeting that the administration would be watching these areas and “reserve the option of consequences.”

CNSNews.com asked Psaki at the White House press briefing, “The president has been criticized for giving Putin a list of 16 critical infrastructure items in the U.S. that he considers off limits to cyber attack. How did that idea come about, and why not tell Putin that everything inside the United States is off limits?”

“First, I don’t think it required the president providing a list for President Putin or Russia to determine what is critical infrastructure in the United States. I know that has been part of the conspiracy response to his proposal,” Psaki said.

“The president was being clear. These are areas where we will be watching, and we will reserve the option of consequences. That was the option he was sending during that meeting and it’s why he put forth those specific examples,” she said.

CNSNews.com asked the press secretary, “Why didn’t he give Putin a list of targets inside Russia that the United States would attack if there’s another cyber attack does take place in the United States?”

“Because we don’t preview our punches,” Psaki replied.

"To hand him that kind of list is essentially to hand him a target list, to give your adversary -- 'whatever you do, don't attack these. These are where we're most vulnerable, so stay away from that,'” Ratcliffe said.

"I mean, that's how Vladimir Putin would look at that. I don't know who's coming up with the strategies. But if you're going to give Vladimir Putin a list, it should have been a list of our targets,” the former DNI said.

“It should have been, hey, if we suffer another major cyberattack, we're coming after one of these, or, even better, shut down the lights in the Kremlin before you go to the summit, so that Vladimir Putin knows you mean business and that when you say, don't cross these red lines, or there will be consequences, he knows that you're serious about that," he added.