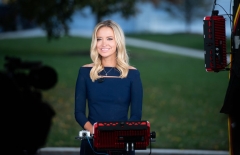 (CNSNews.com) - The $2.2 trillion stimulus bill that House Speaker Nancy Pelosi (D-Calif.) is pushing which was passed by House Democrats amounts to “an illegal immigrant relief package” and provides stimulus checks for illegals, protection from deportation, and even calls for some illegals to be released into the United States, White House Press Kayleigh McEnany said Tuesday.

“She's shown herself to be unserious. She's talking to the president's top negotiators. We were able to get through three stimulus packages prior to today. There’s no reason we can’t do another one. Unfortunately, what Nancy Pelosi put forward was not a stimulus package. it was an illegal immigrant relief package,” the press secretary said.

Senate Majority Leader Mitch McConnell (R-Ky.) said if Pelosi and the president reach a deal, the Senate would take it up.

McEnany said the White House believes Republicans will “come to the table and do what's right for the American people as they always have.” She warned that Senate Minority Leader Chuck Schumer (D-N.Y.) wants to adjourn the Senate until Election Day to secure a win for Democratic presidential nominee Joe Biden.

“What we're dealing with now is a crisis among Democrats. You had Mitch McConnell noted a few moments ago that Senator Schumer wanted to adjourn the Senate, go home, pack up until Election Day, because this is about one thing for Nancy Pelosi and Chuck Schumer, making sure this doesn't happen before Election Day, because they care more about winning elections than relief for Americans,” the press secretary said.

“We're taking this step-by-step. $1.8 trillion is out there. The president said he's willing to go higher. This president, who has the commanding support of the Republican Party and the Republican voters, can make sure this gets done. We certainly need Democrats to come to the table and get around the problems,” she said.

McEnany said they can mute Trump, but they can’t mute the American people.

“Look you can mute the mic of the president of the United States, but you cannot silence the voice of the American people, who are going to show up resoundly for this president. It's pathetic. You even had Bob Dole calling them out, saying that this is not an effective bipartisan commission, and he's exactly right about this,” the press secretary said.

“They set it up for Joe Biden. President Trump negotiated not one, but two Middle East peace deals. He has a tremendous record. Joe Biden, meanwhile, you look at him and worst foreign policy decision ever, never right on it. Those are the words of Bob Gates so it couldn't possibly be the topic, and Kristen Welker certainly gave him cover,” McEnany said.

The president is preparing for the debate by talking to the American people, the press secretary said.

“We're 14 days from an election - the biggest election of our lifetime. What is one of the candidates doing? Hiding in a basement. Hillary made a mistake by not going to Wisconsin. Now you have Democrats doubling down on that, saying we're just not going anywhere except for the ice cream shop,” McEnany said.

She said the media is stacked against Trump.

“There are some fair networks. You ask fair questions. You're a great reporter,” McEnany told Hemmer, “but unfortunately, there are journalists out there that seek to be activists, and I think the American people are wise enough to discern between those asking fair questions and those setting up a political activist line of questioning designed to support the Democrat Party.”