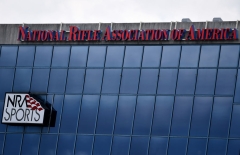 The National Riffle Association of America (NRA) headquarters on August 6, 2020 in Fairfax, Virginia. (Photo by OLIVIER DOULIERY/AFP via Getty Images)

(CNSNews.com) - White House Press Secretary Karine Jean-Pierre called out National Rifle Association CEO Wayne LaPierre on Thursday, accusing him of not wanting to solve the problem of gun violence and instead contributing to it.

The press secretary made it clear that the White House doesn’t have a problem with the convention itself, the timing of it, or its location - in the same state where the Uvalde school shooting took place just days beforehand.

Instead, she took issue with what the NRA represents.

“The NRA is opening its convention in Houston tomorrow, three days after the massacre in Uvalde. Former President Trump, Texas Governor Abbott and others are set to speak there. Does the White House think it’s appropriate for that convention to move forward? Should it be postponed, canceled given the events of the last few days?” a reporter asked.

“So it’s not about the convention. What is inappropriate is that the leadership of the National Rifle Association has proven time and time again that they are contributing to the problem of gun violence, not trying to solve it. They represent the interests of the gun industry, the gun manufacturers who are marketing weapons of war to young adults,” Jean-Pierre said.

“They don’t represent gun owners who know that we need to take action, and it’s shameful that the NRA and their allies have stood in the way of every attempt to advance measures that we all know will save lives from gun violence, measures that we know will keep weapons of war out of the hands of people who are terrorizing our community, so that is what matters, and it is shameful,” she said.

The press secretary was asked whether the president would support raising the minimum age at which a person can buy a gun, given that the average age of suspects in school mass shootings is 18.

“So the president was very clear about this just recently when he said that in his remarks just on Tuesday that it doesn’t make sense for an 18-year-old to legally buy an assault weapon, and so he made very clear on Tuesday after he landed from Asia and had to deal with such a devastating news that happened in Texas,” Jean-Pierre said.

When asked whether President Biden believes there should be an investigation into the police response to the Uvalde school shooting, she said, “We’ve been watching the reporting on this. The president has the utmost respect as you all know for the men and women of law enforcement.

“Just days ago, he honored the memory of the former police officer Aaron Salter in Buffalo, who was killed bravely while trying to stop the shooter at the supermarket. I know that right now authorities are working to piece together more details of what happened in Uvalde, so we won’t prejudge the results from here at this time,” the press secretary said.

“It is always a good idea to look back and try to find any lessons we can learn especially from tragedies like this so that we can prevent them from moving forward, including law enforcement response,” she said.