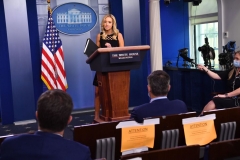 White House Press Secretary Kayleigh McEnany speaks to the press on June 19, 2020, in the Brady Briefing Room of the White House in Washington, DC. (Photo by NICHOLAS KAMM/AFP via Getty Images)

(CNSNews.com) – White House Press Secretary Kayleigh McEnany called on the media on Friday to be fair in its coverage of President Donald Trump’s rallies versus how it covered the Black Lives Matter protest.

McEnany noted that a video by Media Research Center, parent company of CNSNews.com, and NewsBusters, which is also owned by the MRC, compiled examples of the mainstream media boasting about the large number of protesters gathered to protest police brutality, but then voicing concern about the safety of Trump rallies.

“One thing I would note, and I just think it's very important, especially as we go into the weekend and we begin to look at some of the news coverage out there is that I would encourage all of you to cover the protests in the same way that you covered the rallygoers,” she said.

“It’s really quite something when you look at this extraordinary video by Media Research Center and NewsBusters where you have multiple hosts on MSNBC, CNN, and CBS boasting about the ‘massive crowd, I mean massive, tens of thousands of people, thousands and thousands, up to 200,000 people,’ they exuberantly exclaim, but then they have grave concerns about the size of the Trump rallies,” McEnany said.

The press secretary accused the liberal media of “cherry-picking science.”

“You have an MSNBC contributor saying ‘social justice over social distancing,’ but when the president looks to celebrate the accomplishments for minority and communities [sic] in this country,” McEnany said.

“Our rallies are derided as ‘breeding grounds for coronavirus’ while Lawrence O’Donnell celebrates arm-in-arm protests, so I really think that we should have internal consistency here in the way we cover large crowds. We should be guided by science, not cherry-picking science as I see all too often on the airways, especially from CNN,” she added.