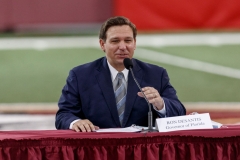 (CNSNews.com) - Florida Gov. Ron DeSantis threatened to withhold the salaries of school superintendents or school board members who defy the governor’s executive order banning mask mandates for students in schools, a decision that was panned by the White House.

“With respect to enforcing any financial consequences for noncompliance of state law regarding these rules and ultimately the rights of parents to make decisions about their children’s education and health care decisions, it would be the goal of the State Board of Education to narrowly tailor any financial consequences to the offense committed,” the governor’s office said in a statement Tuesday.

“For example, the State Board of Education could move to withhold the salary of the district superintendent or school board members, as a narrowly tailored means to address the decision-makers who led to the violation of law,” the statement said.

“Education funding is intended to benefit students first and foremost, not systems. The Governor’s priorities are protecting parents’ rights and ensuring that every student has access to a high-quality education that meets their unique needs,” it added.

“Well, I do want to call out the — the courage and the boldness of a number of leaders in Florida, including in Miami-Dade County — people who are stepping up to do the right thing to protect students and keep schools safe and open,” Psaki said Tuesday.

“We are continuing to look for ways — to go back to your question, Peter — to — for the U.S. government to support districts and schools as they try to follow the science, do the right thing, and save lives,” she said.

“I would note: What is publicly available and knowable is that the American Rescue Plan funds that were distributed to Florida to provide assistance to schools have not yet been distributed from the state level. So, the question is: Why not?” Psaki said.

“And those can be used to cover expenses that come up in this period of time. They’re federal funds, and they’re not under — they’re under federal discretion. So they just need to be distributed to the schools. We’re looking into what’s possible,” the press secretary said.

When asked what she would say directly to DeSantis about this threatened punishment, Psaki said, “Well, we would say what we’ve said from the beginning, Peter, which is that if you’re not interested in following the public health guidelines to protect the lives of people in your state, to give parents some comfort as they’re sending their kids to school — schools are opening in Florida, this week, I know, in many parts of Florida — then get out of the way and let public officials, let local officials do their job to keep students safe.

“This is serious, and we’re talking about people’s lives, and we know, based on public health guidelines, that even though kids under a certain age are not yet eligible, masks can have a huge impact,” the press secretary said.

When asked whether the administration is aware of any mechanism to withhold federal funding from Florida “if the governor keeps up this kind of activity,” Psaki said, “I don’t have any announcements to preview today. Obviously, we don’t want to hurt the people of Florida.

“We want the people of Florida to continue doing what they’ve done, which is to go out and get vaccinated, make sure they’re protecting themselves and their neighbors and loved ones. What I was really speaking to at that point is the schools being under the threat and their administrators of not getting paid, and certainly, we’re looking into that and how we could help address that,” she said.

When asked if the administration is looking into a workaround if need be if the governor withholds funds, the press secretary said, “Well again, it’s knowable that the American Rescue Plan school funds have not been distributed across the state to all the schools that would be eligible, but we’re continuing to look into what our options are to help protect and help support these teachers and administrators who are taking steps to protect the people in their communities.”