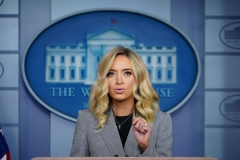 White House Press Secretary Kayleigh McEnany speaks during a briefing in the Brady Press Briefing Room of the White House in Washington, DC, May 8, 2020. (Photo by MANDEL NGAN/AFP via Getty Images)

(CNSNews.com) - “The FBI exists to investigate crimes, but in the case of Lieutenant General Michael Flynn, it appears that they might have existed to manufacture one,” White House Press Secretary Kayleigh McEnany said Friday in response to the DOJ’s decision to drop the case against Flynn.

“As a motion filed by the Department of Justice yesterday explained, the FBI set out to interview General Michael Flynn when they had no predicate for any investigation of any crime. Over the past week, we learned from a handwritten note the true intent behind the FBI's investigation of lieutenant Gen. Michael Flynn,” McEnany said.

“The very day that then-FBI Director Jim Comey sent agents to the white house to interview Flynn, the FBI discussed what their intent was beforehand. This is what they said. ‘What is our goal? Truth admission, or to get him to lie so we can prosecute him or get him fired?’ These notes, in addition to other evidence, raised serious questions about the handling of the FBI's handling of Michael Flynn's case,” the press secretary said.

McEnany then referenced a commentary by Wall Street Journal columnist Kimberly Strassel, who detailed “the very concerning aspects” of the case.

“Kimberley Strassel of The Wall Street Journal laid out, point by point, the very concerning aspects of this case. I'm going to reiterate them as outlined in her column over the weekend,” the press secretary said.

In December 2016, Flynn spoke as the incoming national security advisor to the Russian ambassador. This call, as is customary, was recorded by the United States government. They record calls with foreigners, but in a highly irregular move, the intelligence community under the Obama administration unmasked the identity of Michael Flynn, a United States citizen, who was entitled to Fourth Amendment rights and to due process, but Lieutenant General Michael Flynn received none of that.

The intelligence community was hunting for evidence against General Flynn, evidence they did not find. We learned from newly-released transcripts that, in stark contrast to what former DNI James Clapper had been saying publicly, and contrary to what he was saying publicly, here's what he was saying privately with regard to Russian collusion. ‘I never saw any direct empirical evidence that the Trump campaign or someone in it was plotting or conspiring with the Russians to meddle with the election.’ Sounds awfully different from what he had just said 10 days prior in a public capacity.

Having found no evidence of Russian collusion, the FBI came up with a new, absurd theory that Flynn might have violated the Logan Act, a statute from 1799 that, in its 200 years of existence, had never been used to convict an American citizen, but it was resurrected in the case of lieutenant general Michael Flynn. Michael Flynn didn't violate the Logan Act. Even the FBI did not think that General Flynn's telephone call provided the predicate for a criminal investigation.

According to yesterday's motion to dismiss the case against lieutenant general Michael Flynn, it said this. ‘Mr. Strzok immediately relayed the serendipitously good news to Lisa Page, special counsel at the FBI, remarking, our utter incompetence actually helps us.’ That's right, their ‘utter incompetence’ to close the case against general Michael Flynn was something to be serendipitously celebrated.

The scheme to manufacture a case against Michael Flynn continued. After President Trump entered office, the FBI's partisan pursuit of General Flynn proceeded under Jim Comey’s FBI. Despite possessing a transcript of Flynn's entire conversation, the FBI decided it was somehow necessary to go ask general Flynn what happened on the call, despite having a transcript in their possession.

The only motive would have been to ‘get him to lie.’ They advised him he didn't need a lawyer present. Imagine that, you're an American citizen. You don't need a lawyer. We're just coming in to have a chat.’ They didn't inform their superiors at the Department of justice about their intent to interview Flynn, despite their own attorney at the FBI saying, ‘If we usually tell the White House, then I think we need to do what we normally do,’ but they ignored the advice of FBI counsel, and they went into interrogate Michael Flynn.

Acting Attorney General Sally Yates, no fan of President Trump's, said she was flabbergasted, she was dumbfounded by the decision to not inform DOJ officials, who ‘Hit the roof.’ This is all outlined in a legal document you can find. Additionally, when the FBI arrived at the White House, they did not even warn lawyerless Flynn about the consequences for providing an inaccurate response.

The interrogation of Michael Flynn was not an inquiry. Make no mistake. It was a trap. Even more troubling was the fact that, after the interrogation of Flynn, former deputy director of the FBI, Andy Mccabe, concluded that he, ‘didn't think Flynn was lying,’ but the case against Flynn continued.

McEnany said the White House was “pleased” to learn that the DOJ moved to drop the case against Flynn.

“Though it took several years. It is encouraging to see that justice finally prevailed,” she said, adding that the revelations should be taken “very seriously” so that Americans can have faith in the justice system.

The press secretary issued a warning for all Americans.

“If the top leadership of the FBI can target a three star general who served this country for three decades, make no mistake, they can target you. It's hard to believe that this happened in the United States of America,” she said.

McEnany said that Flynn was forced to sell his home, faced financial ruin, and his family was “threatened with prosecution.” Despite that, she noted that in reaction to the DOJ’s motion to dismiss the case against him, he posted a video on his Twitter page of his grandson “talking about how much he loves this country and how everyone deserves justice for all.”

She pointed out that media coverage of Flynn’s exoneration paled in comparison to coverage of him pleading guilty to lying to the FBI.

“I hope the media will take these questions very seriously, will report the facts. There was heavy interest in the first iteration of Flynn news from many years ago, that got four times the coverage that the exoneration of Michael Flynn got today. That was a report by the Media Research Center. These facts are important, and thank you for those who have taken interest in reporting,” McEnany said.