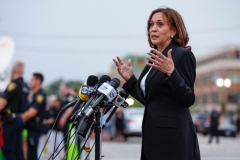 Vice President Kamala Harris speaks during a surprise visit to the site of a shooting which left seven dead in Highland Park, Illinois, on July 5, 2022. (Photo by KAMIL KRZACZYNSKI/AFP via Getty Images)

(CNSNews.com) - Vice President Kamala Harris would not say whether she believes that Supreme Court Justices Neil Gorsuch and Brett Kavanaugh should be impeached for misleading senators during their confirmation hearings on Roe v. Wade.

“Speaking of Congress acting, some senators have suggested that Justice Gorsuch, Justice Kavanaugh misled them during the confirmation hearings on Roe v. Wade. Some Democrats have even called for those justices to be impeached. Do you believe they should be impeached?” CBS’s “Face the Nation” host Robert Costa asked.

“I start from the point of experience of having served in the Senate. I never believed them. I didn't believe them. It's why I voted against,” Harris said.

When asked what now, the vice president said, "We need to understand that states are passing laws because of what the Supreme Court has now allowed to happen. So what does this mean? It means that we're looking at elections coming up in 120-something days. They're going to be about who serves in Congress, and we need a pro-choice Congress.

"Again, you don't have to advocate or believe that this is right for you or your family, but don't let the government make the decision for her family, whoever she may be. It means state offices, governors, secretaries of state, attorneys general. It means local races," she said.

The vice president said that we all share “a deep sense of outrage” that the Supreme Court “took a constitutional right that was recognized, took it from the women of America.”

“I mean, sit back and think about that for a moment. The highest court in our land just took a constitutional right that was recognized for women to make decisions about their own bodies, and so now we are looking at a situation where the government can tell a person in our country what they can and cannot do with their own body,” Harris said.

“You don't have to agree that you want to, or would advocate that you or a loved one would have an abortion, to agree that the government should not be making that decision for any individual woman,” she said.

"No, that's right, and that's why I do believe that we are living, sadly, in real unsettled times. There's another example of this point, voting rights," the vice president said.

"The fundamental principle of our democracy is, everyone should have access, who are entitled, to have access to vote, and now you see states across the country that are intentionally making it more difficult for people to vote," she said.

When asked what the Biden administration will do to try to codify Roe and put into law some of these priorities,” Harris said, “What we will do through the executive branch to ensure that women have the ability to travel freely, unencumbered, that women will have access to the medication, but we also need Congress to act, because that branch of government is where we actually codify, which means put into law the rights that, again, we took for granted, but clearly have now been taken from the women of America.

“We've seen this in the past, if you think about the Voting Rights Act. Congress acted. Civil Rights Act, Congress acted, because where there was any question, especially through the courts or any other system, about the sanctity of these rights, we decided as a nation we would put it into law. That's what we need to do with Roe and the principles behind Roe,” the vice president added.