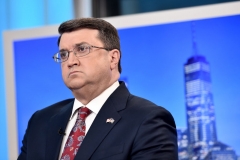 (CNSNews.com) - VA Secretary Robert Wilkie told CNN’s “State of the Union” on Sunday that President Donald Trump should be judged by his actions, and those actions “have been beneficial for veterans all across this country in ways that we have not seen since the end of World War II.

The secretary was responding to allegations published in The Atlantic that cited anonymous sources who said Trump called fallen soldiers “losers” and “suckers” during a trip to France in 2018 about ceremonies marking the 100th anniversary of the end of World War I.

“I judge a man by his actions, and the actions have been beneficial for veterans all across this country in ways that we have not seen since the end of World War II, and I would also say the same for the United States military,” Wilkie said.

“I was the undersecretary of defense for personnel and readiness. I watched this president sign letters of condolences to those who have fallen in Afghanistan and Iraq. I was on the front lines then,” he said.

Asked whether he has heard the president say crude or disparaging remarks about the military, Wilkie said, “Well, absolutely not, and I would be offended, too, if I thought it was true. Again, I think anonymous are the same people that brought you fake heart attacks, fake strokes, Russian collusion.

As to whether he can be sure the allegations aren’t true since the anonymous sources aren’t backing down, Wilkie said, “Well, nobody is backing down from these anonymous sourcing on it, and some of these sources that you cite are general officers. I was born in khaki diapers. I have spent my entire life around the military, and I have never known any general officers to hide behind stars.

“So, what I am looking at is the Donald Trump that I know, the Donald Trump who has turned around Veterans Affairs from a place that, in the Obama administration, was 16 out of 17 in terms of best places to work. We're now under -- up to six,” the secretary said.

CNN’s Dana Bash pointed out that Trump disparaged the late Sen. John McCain (R-Ariz.) and his experience as a prisoner of war.

“Well, I understand that, in the passion of a campaign, with two powerful personalities -- and I'm a friend -- I was a friend with John McCain. His family and my father -- my mother's family grew up in the same county in Mississippi. He was very much responsible for my career and advancing it, and President Trump has been the same,” Wilkie said.

“I understand politics. I understand name-calling when it comes from both sides, but all I can say is, the proof in the pudding for us is what has happened to veterans in the last three years,” the secretary said.

Bash asked Wilkie as someone who was close to McCain whether Trump’s insults against McCain were acceptable.

“Well, it's politics. It's the heat of a campaign,” Wilkie said.