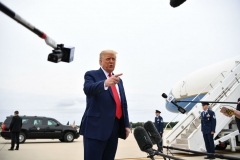 President Donald Trump speaks to the media as he makes his way to board Air Force One before departing from Andrews Air Force Base in Maryland on September 1, 2020, heading to Kenosha, Wisconsin to meet with law enforcement officials and to survey damage following civil unrest in the city. (Photo by MANDEL NGAN/AFP via Getty Images)

(CNSNews.com) - President Donald Trump responded to allegations in a Bob Woodward book that he downplayed the coronavirus at first, saying Wednesday that he may have done so “in order to reduce panic.”

Speaking at a White House event to unveil his list of judicial nominees, Trump was asked to address the concerns of the Woodward book and whether he misled the public on COVID-19.

“Well, I think if you said ‘in order to reduce panic,’ perhaps that’s so. The fact is, I’m a cheerleader for this country. I love our country, and I don’t want people to be frightened. I don’t want to create panic, as you say, and certainly, I’m not going to drive this country or the world into a frenzy,” he said.

Trump said Vice President Mike Pence and others in the administration working on the coronavirus response have done a “great job” but haven’t been acknowledged by the media.

“Whether it’s ventilators -- and now, you’ll see very soon, with vaccines and with therapeutics, the job we’ve done has been incredible, but we don’t want to -- we don’t want to instill panic. We don’t want to jump up and down and start shouting that we have a problem that is a tremendous problem -- scare everybody,” the president said.

“And I’ll tell you the other thing: We immediately started buying. All over the world, we started buying masks and gowns and everything else, and we don’t want to cause pricing to go up to a level that becomes almost unaffordable. So yeah, in that sense -- so, in that sense, I agree with it,” he said.

When asked how he can reassure the public going forward that they can trust what he’s saying, Trump said, “Well, I think that’s really a big part of trust. We have to have leadership. We have to show leadership, and the last thing you want to do is create a panic in the country. This was a horrible thing. It was sent to us by China. It should not have happened -- should never have happened.

“This is a disgusting, terrible situation that was foisted upon us, and we have to show -- we just don’t want to use -- the best word is ‘panic.’ We don’t want to have to show panic. We’re not going to show panic, and that’s exactly what I did, and I was very open -- whether it’s to Woodward or anybody else. It’s just another political hit job, but whether it was Woodward or anybody else, you cannot show a sense of panic or you’re going to have bigger problems than you ever had before.

When asked whether he thinks he could have saved more lives if he were more forthright with the country and whether he takes responsibility for the deaths of 200,000 people, Trump said, “So, I think if we didn’t do what we did, we would have had millions of people die. We closed up our country. We closed it up very, very quickly, very effectively. We did a job.

“We learned about this horrible disease, along with the rest of the world, which had to learn about it, and then we opened it up, and now we know the vulnerable-- we know who it attacks, who it’s so vicious against, and I think we’ve done, from every standpoint, a(n) incredible job. We shouldn’t have lost anybody,” the president said.

“China released something that they shouldn’t have been allowed to -- they should not have released. It came out of China. It went to Europe. It went all over the world. It should have never happened. They could have stopped it. They stopped it from going into the remainder of China. It started in Wuhan, and they stopped it, but they didn’t stop it from coming to our country,” he said.

“Now, we had to show calm. We had to show -- you know, if it was up to you or whoever -- I have no idea what he said in the book, and again, it’s a book that -- I gave him some quotes and, frankly, we’ll see how the book turned out. I have no idea. You’re asking me questions for the first time, but, again, the last thing we can show is panic or excitement or fear or anything else,” Trump said.

“We had to take care of the -- we had to take care of the situation we were given. Now, long before anybody else wanted to do it, I closed our borders to a very heavily infected China. If I didn’t do that, we would have had hundreds of thousands more people die. Dr. Fauci said it. Many people said it. It was a great decision. It was a decision I made and I had to make,” the president said.

Trump said a lot of people including House Speaker Nancy Pelosi (D-Calif.) and former Vice President Joe Biden thought he was wrong to ban flights from China, but if he hadn’t, millions of people would die from COVID-19 instead of the thousands of people who died.

“Mr. President, you mentioned that you were trying to avoid price gouging.  But you mentioned to Bob Woodward that you recognized, as this virus spread through the air, in -- on February 7th -- you didn’t begin Project Air Bridge until March; you didn’t use the Defense Production Act until March. You didn’t start ramping up ventilator production until March,” a reporter said.

“Well, I mean, you didn’t really think it was going to be to the point where it was. All of a sudden, the world was infected. The entire world was infected. Everyone was scrambling around, looking where to buy facemasks and all of the other things.     We’ve opened up factories. We’ve had tremendous success with facemasks and with shields and with the ventilators,” the president said.

“We’re now supplying the rest of the world. We have all the ventilators we can use, and remember this: The ventilators were very important. Not one person that needed a ventilator didn’t get it, and these are very complex, expensive machines to make. We opened up something like hadn’t been done since the Second World War,” he said.

Trump said that leadership is all about “confidence in our country, and our people have been great.” He blamed China, saying they “could have done something about it, and they chose not to.”.