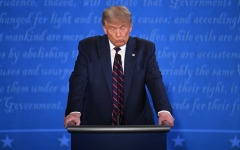 During the first presidential debate held in Cleveland, Ohio, moderator Fox News’ Chris Wallace asked the president, “Forest fires are raging. They have burned millions of acres. They have displaced hundreds of thousands of people. When state officials blamed the fires on climate change, Mr. President, you said, ‘I don't think the science knows.’ Over your four years, you have pulled the U.S. out of the Paris Climate Accord. You have rolled back on a number of Obama environmental records. What do you believe about the science of climate change? What will you do in the next four years to confront it?”

TRUMP: I want crystal clean water and air. I want beautiful clean air. We have now the lowest carbon -- if you look at our numbers right now, we are doing phenomenally. I haven't destroyed our businesses. Our businesses aren't put out of commission. If you look at the Paris Accord, it was a disaster from our standpoint, and people are actually very happy about what's going on, because our businesses are doing well.

WALLACE: What do you believe about the science of climate change?

TRUMP: I believe we have to do everything we can to have immaculate air, immaculate water and do whatever else we can that's good. We are planting a billion trees. It's very exciting.

WALLACE: Do you believe human pollution, greenhouse gas emissions contributes to the global warming of the planet?

TRUMP: I think a lot of things do, but I think to an extent, yes. I think to an extent, yes. I also think we have to do better management of the forest. Every year I get the call. California's burning. California's burning. If that was cleaned, if you had forest management, good forest management, you wouldn't be getting those calls. In Europe, they are called forest cities. They maintain their forests. They manage their forests. I was with the head of a major country.

It's a forest city. He said sir, we have trees that are far more -- they ignite much easier than California. There shouldn't be that problem. I spoke with the governor about it. I'm getting along very well with the governor. I said at some point, you can’t every year have hundreds of thousands of acres of land just burned to the ground. That's burning down because of a lack of management.

WALLACE: If you believe in the science of climate change, why have you rolled back the Obama clean power plan which limited carbon emissions in power plants? Why have you relaxed---?

TRUMP: Because it was driving energy prices through the sky.

WALLACE: Why have you relaxed fuel economy standards that are going to create more pollution from cars and trucks?

TRUMP: Not really, because what’s happening is the car is much less expensive, and it's a much safer car and you're talking about a tiny difference and then what would happen, because of the cost of the car, you would have at least double and triple the number of cars purchased. We have the old slugs out there that are 10, 12 years old. If you did that, the car would be safer. It would be much cheaper.

WALLACE: In California, they simply---

TRUMP: No, but you would take a lot of cars off the market, because people would be able to afford a car. By the way, we are going to see how it turns out but a lot of people agree with me, many people. The car has gotten so expensive because they have computers all over the place for an extra little bit of gasoline, and I'm okay with electric cars too. I'm all for electric cars. I've given big incentives for electric cars, but what they have done in California is crazy.