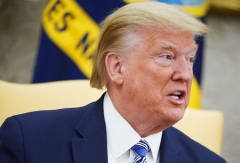 (CNSNews.com) - President Donald Trump indicated on Tuesday that while he’s open to reimbursing states for lost revenue from the coronavirus pandemic, he’s not interested in providing bailouts for mismanagement or rewarding sanctuary city policies.

During a White House meeting with Florida Gov. Ron DeSantis, Trump was asked about providing aid to states suffering from lost revenues from COVID-19.

“We’d have to talk about a lot of different things. We are certainly open to talking, but it would really have to be COVI-related, not related for mismanagement over a long time, over a long period of time,” Trump said.

“It's a very simple distinction to make. We are not looking to do a bailout for a state that’s been -- it's unfair to many of the states, most of the states that have done such a good job,” he said.

Meanwhile, New York Attorney General Letitia James criticized Trump, saying his “threat” to hold funding for sanctuary cities and states “until certain ‘sanctuary city adjustments’ are made” is an attempt to feed his political base and “push a sinister political agenda.”

She indicated that if the president withholds funding for that reason, she will take legal action.

“President Trump’s threat to hold coronavirus funding hostage to cities and states across the country are the latest in his efforts to push a sinister political agenda that only aims to punish us all — citizens and non-citizens alike. This is just another attempt to again feed to his base and push the same partisan ideology we’ve seen for the last three years,” James said in a statement.

“New York is proud of its status as a sanctuary state that welcomes and will fight to protect its immigrant residents — many of whom are fighting on the frontlines to battle the coronavirus. It is my sincerest hope that one day the president will wake up and realize the power of his words, until that day comes we will be ready to take legal action,” she said.