Trump Spokesman: Even in ‘a Quarantine, at Walter Reed, This President Still Did More Events Yesterday Than Did Joe Biden’ 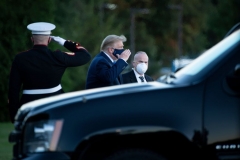 President Donald Trump (C) walks off Marine One while arriving at Walter Reed Medical Center in Bethesda, Maryland on October 2, 2020, after testing positive for covid-19. (Photo by BRENDAN SMIALOWSKI/AFP via Getty Images)

“I will make one point. That is with COVID, with a quarantine, at Walter Reed, this president still did more events yesterday than did Joe Biden,” Gidley told “Bill Hemmer Reports.”

Gidley also pushed back at the media outrage at Trump taking a ride in the motorcade outside Walter Reed to wave at his supporters. The media criticized Trump for putting his Secret Service detail at risk.

Gidley said the decision was approved by the White House medical unit.

“The Secret Service are some of the bravest men and women I've ever met, spent hours with them on planes. Their job is to protect the president, and the media’s outrage over this is absolutely stupid and foolish,” he said.

Gidley pointed out that Trump had White House staff, doctors, Marines, and a Secret Service detail on Marine One, transporting him to the hospital on Friday.

“How do they think he's going to leave? Someone gonna toss him the keys to a Buick and let him drive himself home? They’re always around him, because that's their job. They do it. They take it very seriously, and I have for one am thankful they’re around the place,” Gidley said.