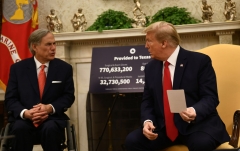 (CNSNews.com) - President Donald Trump reacted to news Thursday that the Justice Department is dropping the case against former National Security Adviser Michael Flynn, saying that the Obama administration’s efforts to build a case of Russian collusion against Trump are “unprecedented” and the people behind it are “human scum.”

In 2017, Flynn pleaded guilty to lying to the FBI. He was accused of lying about his contacts with then-Russian ambassador Sergey Kislyak.

However, the DOJ concluded on Thursday that his interview was "untethered to, and unjustified by, the FBI's counterintelligence investigation” and "conducted without any legitimate investigative basis."

Trump was told about the DOJ’s decision during an Oval Office meeting with Texas Gov. Greg Abbott.

“I didn't know that was happening at this moment. I felt it was going to happen just by watching and seeing like everybody else does. He was an innocent man, he is a great gentleman. He was targeted by the Obama administration, and he was targeted in order to try and take down a president, and what they have done is a disgrace, and I hope a big price will be paid,” the president said.

“This should never have happened in this country, a duly elected president, and they went after him by going after very fine people. And those fine people said, ‘No, I'm not going to lie. I can't lie.’ He’s not the only one. There are many of them, and they all said, ‘I can't lie.’ They could have said something like make up a lie. Trump loves somebody or something or some country, and they said you wouldn't have any problem. That's what they were trying to do, and it’s a disgrace,” he said.

The president accused the Obama Justice Department of “treason.”

“The Obama administration Justice Department was a disgrace, and they got caught. They got caught, very dishonest people, but much more than that, it's treason. So I'm very happy for General Flynn. He was a great warrior, and he still is a great warrior. Now in my book he’s an even greater warrior,” he said.

“What happened to him should never happen again, and what happened to this presidency to go through all of that and still do more than any president has ever done in the first three years is pretty amazing when you think of it with what we've done with regulations and tax cuts and Second Amendment and all of the things we've done,” Trump added.

“It's never happened, and until two months ago, we had the greatest economy in history. Unfortunately, we had to--- like you had in Texas, we had to close it down, but for these people to have done that, I am very proud of General Flynn, I can tell you that right now,” he said.

The president said that the Obama DOJ “should pay a big price” and that the media was complicit in it. He called for Pulitzer Prize-winning journalists who covered it “wrong” to have their Pulitzer Prizes taken away.

“All of those journalists that received a Pulitzer Prize should be forced to give those Pulitzer Prizes back, because they were all wrong. Because if you saw today more documents came out saying there was absolutely no collusion with Russia, came out very loud and clear, and they wrote for years because they tried to do a number on the presidency and this president, happened to be me,” he said.

“Pulitzer Prizes should all be returned, because you know what? They were given out falsely. It was fake news. They're all fake news,” the president said.

According to the DOJ’s court filing, “Mr. Flynn entered a guilty plea—which he has since sought to withdraw—to a single count of making false statements in a January 24, 2017 interview with investigators of the Federal Bureau of Investigation.

“This crime, however, requires a statement to be not simply false, but ‘materially’ false with respect to a matter under investigation. 18 U.S.C. § 1001(a)(2). Materiality is an essential element of the offense. Materiality, moreover, requires more than mere ‘relevance’ or relatedness to the matter being investigated; it requires ‘probative weight,’ whereby the statement is ‘reasonably likely to influence the tribunal in making a determination required to be made.’

“After a considered review of all the facts and circumstances of this case, including newly discovered and disclosed information appended to the defendant’s supplemental pleadings,” the filing stated, “the Government has concluded that the interview of Mr. Flynn was untethered to, and unjustified by, the FBI’s counterintelligence investigation into Mr. Flynn—a no longer justifiably predicated investigation that the FBI had, in the Bureau’s own words, prepared to close because it had yielded an ‘absence of any derogatory information.’

“The Government is not persuaded that the January 24, 2017 interview was conducted with a legitimate investigative basis and therefore does not believe Mr. Flynn’s statements were material even if untrue. Moreover, we not believe that the Government can prove either the relevant false statements or their materiality beyond a reasonable doubt,” the filing stated.