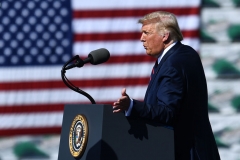 (CNSNews.com) – President Donald Trump said Thursday that Democrats stand for mobs and criminals while he stands for law and order.

Trump said that there’s “only one thing standing between your family and the radical left wing mob, and that is your vote this November.”

“If you want mobs, criminals, you have to vote Democrat, look, because that's what it is about. They don't talk about law and order,” the president told supporters in Old Forge, Pa.

He noted that Democrats like New York Gov. Andrew Cuomo support ending cash bail, which Trump said, led to hundreds of thousands of criminals being released.

“They want abolish cash bail, releasing 400,000 criminals onto our street. No more cash bail. Look at what happened to New York. Cuomo entered cash bail, Cuomo. That wasn't even de Blasio, that was Cuomo the governor. He ended it in New York, and now the crime rate has gone through the roof,” the president said.

“If you want a vision of your life under a Biden presidency, think of the smoldering ruins in Minneapolis, the violent anarchy of Portland, the bloodstained sidewalks of Chicago, and imagine the mayhem coming to your town, and every single town in America. You’re not going to have law and order,” he said.

“If you want jobs and you want a lot of police and you want a lack of crime, you know, if you would take away New York, Chicago, and some of these terrible cities that you see about-- with the crime. I left New York for years ago, and I could see because he has a terrible mayor, I could see the things that were happening that were bad, He’s no Rudy Giuliani, I can tell you that, but I can see things were happening, but the last six months, seven months, it exploded. It is incredible. Crime up 368%,” the president said.

“If you want law and order, you have to have law and order. You can't have what is happening in Portland. Did you see the kid get whacked like a piece of garbage? Who can take that. We don't want that,” Trump said, adding that Democratic leaders are embarrassed to ask for federal help to quell violent mobs in their cities.

“I don't know if they are embarrassed but these Democratic cities, they’re out of control. They have none. Look at Seattle where she said no, we want a summer of love. I mean, this woman is crazy, and they would have never taken back Seattle except they knew we were going in the next day. That’s the only reason that they even did it,” Trump said, referring to Seattle mayor Jenny Durkan.

In June, Durkan told CNN that she had no idea when protesters occupying the Capitol Hill Autonomous Zone (CHAZ) would disperse. She said the area could hold “a summer of love,” referring to a mass gathering of peace activists in 1967 in San Francisco.