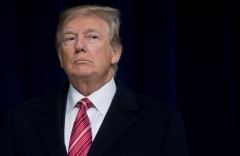 (CNSNews.com) – President Donald Trump said Sunday that despite the Supreme Court’s decision not to hear the Texas lawsuit challenging election results in several states, “It’s not over.”

“No, it’s not over. We keep going, and we’re going to continue to go forward. We have numerous local cases in some of the states that got rigged and robbed from us. We won every one of them. We won Pennsylvania. We won Michigan. We won Georgia by a lot,” the president said in an interview with “Fox and Friends Sunday.”

“We have a governor, Republican governor that is worse than a Democrat. He’s terrible. He’s hurting Kelly and David very badly, the senators that are terrific people, and Wisconsin as you know we have a case going on as we speak. It’s actually going on right now,” he said, adding that “we’re doing individual states.”

The states certify the election on Monday, and on Jan. 6, they transmit the election results. When asked what that will do for the fight, Trump said, “I don’t know. We're going to speed it up as fast as we can, but you can only go so fast. They give us very little time, but we caught them dropping fraudulent, dead people voting and all far greater than the number of votes we need.

“The election was over at 10:00 in the evening. I had won. It was 97, 98 percent. All of the bookies all over the world were saying the election’s over. They wouldn't even take bets on it, and then all of a sudden around 11:00, ballots start getting dropped. You see the graph where you go like this, and then it goes up to the sky? Tens of thousands of ballots were being illegally dropped,” he said.

“The machines are the worse. Dominion, Dominion, nobody knows who owns it. These machines are controlling our country. So it was a rigged election. It was a really a sham and a shame,” the president said.

Host Brian Kilmeade noted that according to a Fox Poll, 77 percent of Trump supporters believe that Trump won the election. He asked Trump if he worried about the country being divided if it goes to inauguration and the president’s supporters still feel that way.

When asked if he thinks his legal team proved that, Trump said, “We never get a chance to prove it, because a judge will say, ‘well I’m sorry. You don't have standing.’ Like how about me? Texas and all of these states, 18 or 19 all together, they come in. Think how nice that is where they actually come in and say, ‘We want to support you, sir, because you're important to this country. We want to support you.

“They go in, and they say states don't have standing, and I don’t have standing. I'm president of the united States. I just got 75 million votes - the biggest number of votes in the history of our country ever gotten by a sitting president. I went from 63 million to 75 million, a 12 million vote difference. That’s the biggest margin in history. They say if I got 67, the smartest people in the business, if I got 67 million votes, I couldn't lose. I got 75 million, and They say I lost. I didn't lose. The election was rigged,” he said.

“All of the things I did. I ran a country, and we ran it great. We've done more than any other president. Then I have to campaign. We had the greatest campaign in history. We had the biggest crowds anyone’s ever had. I did 56 rallies where the number of people were incredible. Okay?” the president said.

“Incredible, record-setting, and then I go home and I watch the television to see how we're doing and by 10:30 in the evening it was over, we won. I got calls from everybody, saying congrat – pros – people you know very well, saying congratulations. I say let's not go so fast. I don't trust these machines and a lot of bad things happen with these people. In essentially five or six states, the local people who run it rigged the election, and tens of thousands-- remember they stopped the counting in the evening?” he said.

“Do you remember Georgia, we had a big flood. We had a pipeline break, a major water pipeline break. It turned out to be a false thing. Everybody, Brian, everybody ran out. They all ran out and, what, where is the pipeline? Guess what? There was no pipeline. That was the people where they took all of those ballots, all of those Biden ballots under the table with the black dress, and they took them, and they started shoving them into machines,” Trump added.

“What happened to this country, we were like a third world country, and I do worry about the fact that, you know, you asked the question, illegitimate president, that’s what you worry about,” the president said.