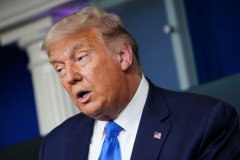 President Donald Trump speaks during a press conference in the Brady Briefing Room of the White House on September 23, 2020, in Washington, DC. (Photo by MANDEL NGAN/AFP via Getty Images)

(CNSNews.com) -   President Donald Trump said Friday that he’s had support from Hispanic-Americans in building the wall, and he likened himself to a wall between the American dream and chaos.

“Many Latino and Hispanic Americans came here to pursue the American dream having left countries that had a very, very unruly group of people. We’re throwing out MS-13 all the time,” the president said.

“You know, the funny thing about the southern border, the wall, safety, the people that understand the border better than anybody are the Hispanics. I have had more support -- they don't want bad people coming into our country or want people coming into the country that will take their jobs and understand it better. I thought it would be the opposite. They understand what we've done on the border. We have stopped it. You can come into the country, but you have to come in legally,” he said.

“The last administration also surrendered to the narco terrorists of Columbia,” the president said.

Colombian socialist leader Gustavo Petro expressed his support for Democratic presidential nominee Joe Biden, saying if he were in the United States, he would vote for the former vice president “only to save humanity from a catastrophe.”

“Joe Biden even received the endorsement of Columbian socialist Petro. Not good, right? Not a good endorsement. A former member of M-19 guerrilla organization, no good, right? Under my administration we work with Colombia friends and have taken in tons and tons of really bad stuff,” Trump said.

“The Obama-Biden administration's Cuba policy betrayed the Cuban people and enriched Castro's regime. I ended that. As you know, we ended it very strongly. We ended it, and we stand with every citizen of Cuba, Nicaragua, Venezuela in their fight for freedom,” the president said.

Biden “betrayed Hispanic Americans” because he sent their jobs to China, attacked their religious values, made their communities less safe, and trapped Hispanic children in failing schools, Trump said.

“Joe Biden has spent 47 years selling out to the different interests in Washington. it's really sad. He sold out the Hispanic American community, sending your jobs to China, making your communities less safe, attacking your religious values and trapping countless children in failing government schools,” he said.

“He doesn't like charter schools. He doesn’t like choice, and choice is a very important thing for education, but he can't do that. It's just against the radical left. The radical left can't have it,” Trump said.

“Joe Biden betrayed Hispanic Americans, and I'm fighting for you, and we're fighting like never before,” the president said.

“Prior to the China virus, the plague that came from China, we received the lowest Hispanic American unemployment rate in the history of our country. It’s six months ago. We're building it up again,” he said.

“Joe Biden would terminate our recovery with a crippling nationwide shutdown and $4 trillion tax hike. He’s looking to raise your taxes substantially,” the president said. “They are looking for the biggest tax hike in the history of our country.”

Trump predicted that Biden will also “lay waste to Florida's economy just like he ruined Puerto Rico's economy in the Senate. In 1996, Biden voted for a tax bill that obliterated Puerto Rico's pharmaceutical industry.”