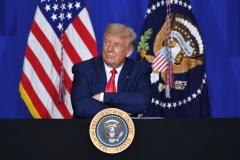 President Donald Trump listens to officials during a roundtable discussion on community safety, at Mary D. Bradford High School in in Kenosha, Wisconsin on September 1, 2020. (Photo by MANDEL NGAN/AFP via Getty Images)

(CNSNews.com) - President Donald Trump lashed out at ABC News White House Correspondent Jonathan Karl who accused the president of lying to the American people about the coronavirus.

During a White House press briefing on Thursday, Karl asked, “Why did you lie to the American people and why should we trust what you have to say."

“That's a terrible question and the phraseology. I didn't lie. What I said, we have to be calm. We can't be panicked. I knew that the tapes were -- these are a series of phone calls, mostly phone calls. Bob Woodward is somebody that I respect just from hearing the name for many, many years, not knowing too much about his work, not caring about his work,” Trump said.

“I thought it would be interesting to talk to him for a period of calls. So we did that. I don't know if it's good or bad. I don't know if the book is good or bad. Certainly, if he thought that was a bad statement, he would have reported it because he thinks that, you know, you don't want to have anybody that is going to suffer medically because of some fact,” he said.

The president said that Woodward didn’t report what Trump said sooner “because he didn't think it was bad.”

“Nobody thought it was bad,” he said, adding that the way Karl phrased his question is “a disgrace” to his network.

“And your question, the way you phrased that is a disgrace. It's a disgrace to ABC television network, a disgrace to your employer. That's your answer. You ready? I love -- of course I didn't,” Trump said.

“You said it was deadlier than the flu and told the American public this was just like the flu. You told everybody else something else,” Karl said.

“No. Five times, right? Five times. You ever hear the expression five times? We’ve had flu years where we lost 100,000 people. The flu is a problem for this country also,” Trump said, adding that thousands of people have died from the flu over the years.

He confirmed statistics for flu deaths from a member of his administration who was on hand for the briefing that 80,000 people die from the flu every year even with anti-viral drugs.

KARL: You said this is deadlier than the most strenuous flu and then you said it's just like the flu.

If you look at the opposition where they said oh, why did he put the ban on? Dr. Fauci said we said hundred of thousands of lives. There is no lie here. What we're doing is leading. We're leading in a proper way. If frankly somebody else was leading it, they wouldn't have closed it. If you look at Nancy Pelosi, you look at Cuomo, you look at de Blasio, look at Biden. Months later, they said there's no problem. They're talking about me. Months later. Before any statement was made, you have to remember, I put the ban on China. So obviously outwardly I said it's a very serious problem. It's always a serious problem. That doesn't mean I'm going to jump up and down in the air and say people are going to die.

People are going to die. No. I'm not going to do that. We're going to get through this. We're rounding the final turn. A lot of good things are happening with the vaccines and with therapeutics. But there's no lying. The way you asked that question is very disgraceful. Bill, go ahead, please. I think we did a great job. People that did that, our generals, admirals, Mike pence, all of the people that worked so hard. No Dr. Atlas, Dr. Fauci, Dr. Birx. They should be respected for the job that they have done.

KARL: So you won't downplay it again. You downplayed it.

TRUMP: No, I don't want to jump up and down and start screaming death, death, because that's not what it's about. We have to lead a country. We're leading a great country. We're doing a great job. The people that have done such a good job should be given the kind of credit that they deserve.

We've done the best jobs. You look at what we're doing with the vaccines and therapeutics and ventilators. We make thousands a month now and supplying them to the whole world. The job we've done is the best job. Don't give me credit. Give the people that have done this the credit.