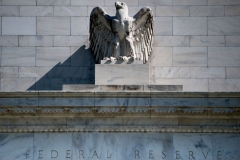 (CNSNews.com) - The U.S. economy struggled with inflation in the 70s when Jimmy Carter was president, prices kept going up, and voters got fed up and elected Ronald Reagan by a landslide, former Trump economic adviser Steve Moore said Thursday.

He said what’s happening now is a “carbon copy” of that.

“If I were Joe Biden, I’d get going on trying to stop this inflation. I lived through the 1970s,” Moore told Fox News’ “America’s Newsroom.

“I remember when Jimmy Carter was president and every time he went to the grocery story and the gas station, prices kept going up and up and up, and inflation got worse and worse, and Ronald Reagan ended up winning a landslide election in 1980 against an incumbent president and I think inflation was the major concern of voters that year,” he said.

“You're seeing that reemerge now, Bill. It’s like a carbon copy of what happened in the 70s where week by week, month by month, these inflation numbers keep getting worse. Gasoline prices are now $1.30 higher than they were one year ago. That means when a middle class or lower income person is filling up their tank, they’re paying 20 bucks more,” Moore said.

“That's a lot of money for people to pay. I think the Federal Reserve Board and the Biden administration have been asleep at the switch on this one. If I were Joe Biden, I would say we do not need another $4 trillion spending bill. All that money creation and all that money in the economy is going to make inflation worse,” he said.

Former Obama economic adviser Austan Goolsbee said that what’s happening now is a global crunch on the supply chain and other countries are dealing with inflation because the entire world is trying to come back from the pandemic at the same time.

“Not to beat a broken record about it, but you’ve to get control of the spread of the virus so people can go back to buying services which is what we mostly spent our money on before the pandemic. What we’ve had is a huge shift of buying of physical goods. The system cannot handle that, that the entire world is trying to buy goods all at the same time,” Goolsbee said.

“We’ve got to be able to shift the spending back to services. It’s going to be months, and it’s gonna-- I think that Steve is right, it's going to be a political problem for the Biden administration for sure,” he said.

Moore said he hopes that Sen. Joe Manchin (D-W.Va.) is a no vote on the Build Back Better bill, because the Democrats cannot afford to lose one Democrat in the Senate. He also said that inflation is a global problem right now, because the entire world is “dollarized,” so when there’s inflation in the U.S., it causes worldwide inflation.

“Austin is right that inflation is a global problem right now, but, Austin, what you're missing is that the entire world is essentially dollarized, so when we have inflation in the United States, it causes inflation all over the world. We had $1 trillion in the pipeline from COVID relief bills that passed at the end of the Trump administration and then $2 trillion dollars for the blue state bailout bill,” he said.

“Then a trillion dollars for this infrastructure bill. Now they want $4 trillion more. I mean come on, Austin. We’re just flooding the zone with so much money. It’s gotta cause inflation. I think it's going to make it worse,” Moore said.

However, Goolsbee said that China, Germany, and Europe “do not use the dollar predominantly in their economies.”

“What’s happening, as I said, is a crunch on the supply chain. Any bill that is paid for is not providing stimulus, so if you take the Build Back bill, and you just fill in a higher tax rate on billionaires and large corporations, which Steve is a big fan of, then it would eliminate any inflationary impact of those bills, so I think if for sure Joe Manchin is opposed to Build Back Better, the White House is going to scramble because they need every vote, they need every Democratic vote to pass a reconciliation. Inflation is a worldwide phenomenon,” he said.