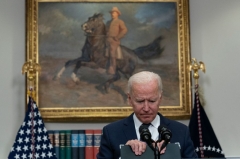 (CNSNews.com) -  Former White House Chief of Staff Mark Meadows told Fox News’s “Hannity” on Wednesday that President Joe Biden’s foreign policy is “America left behind,” unlike former President Donald Trump who negotiated from a position of strength when it came to the Taliban in Afghanistan, including threatening to “obliterate” them if they didn’t follow “every period and every comma.”

Fox News host Sean Hannity said that Trump’s plan for withdrawing U.S. troops from Afghanistan included “an orderly withdrawal” and that “not a single American died in the last 18 months of Donald Trump’s presidency in Afghanistan.”

“You are exactly right, and you nailed it on the nail on the head, because exactly that. I talked to the president tonight, and we were talking about this debacle in Afghanistan. You can't imagine that it could be much worse, and yet, I was in the room many times, not only when he had strong rhetoric but was willing to back that up with the might of the U.S. military, and what we found is, is that Joe Biden now has a new policy,” Meadows said.

“It's called America left behind. It's a left behind policy. He left behind billions of dollars worth of Humvees and U.S. equipment,” Trump’s chief of staff said.

“He left behind Americans. He left behind our allies, and quite frankly, when you start to look at what he’s been involved with, no wonder his polling is going down, but Americans are now starting to understand what President Trump and many of us that supported him knew all along is you can't run the country from the basement, and today they cut off his mic when he went to talk,” Meadows said.

“He had one question. They cut off his mic. I mean can you believe it could get this bad this quickly? I didn’t imagine it would get this bad, but can we stand another three years of this kind of leadership? I think he is unfit, and quite frankly, there are talks of impeachment going on, on Capitol Hill right now,” he said.

Hannity asked former Bush spokesperson Ari Fleischer how the Biden administration could leave behind billions of dollars in U.S. military equipment and how is it possible that “they didn’t see what was going on in May, June, July and act?”

“The reason is just as Joe Biden advised Barack Obama that the military was just trying to jam you, Joe Biden thought he knew better than the Pentagon, and he just wanted to bug out. He was just Bug Out Biden, and he didn’t pay attention,” Fleischer said.

“He didn’t give the proper instructions for how to get out of Afghanistan properly, and you know, earlier today I heard the former Trump State Department spokesperson Morgan Ortagus talk about the position of the Trump administration and that the Democrats don't understand and Biden doesn’t understand is to negotiate from a position of strength having killed Qassem Soleimani, having destroyed ISIS, having dropped the biggest bomb in America’s arsenal short of a nuclear weapon on the Taliban, when Donald Trump negotiated, he certainly was negotiating from a position of strength, and people feared him,” he said.

“That's a healthy thing when dealing with the Taliban. Biden, it was just Bug Out Biden. He wanted to get out so bad, he left it all behind, and he left o Americans behind, it looks like, and certainly is going to leave tens of thousands of our allies behind,” Fleischer added.

Meadows agreed with Fleischer’s assertions about Biden, adding that “when you look at a position of strength, it took a strong leader in President Trump.”

“Let me just tell you, it was not just tough talk, but when you looked at the Taliban, whether it was Secretary Pompeo or President Trump, all they had to look to was al-Baghdadi, Soleimani, and they knew exactly that he meant what he said. What we’ve got is Appeasement-Joe, and it's not working well for the Americans,” Meadows added.

“And you can confirm that Donald Trump said, ‘Before we even talk about a deal, let me tell you upfront, if you don't follow every period and every comma, I will obliterate you.’ Is that true or false?” Hannity asked.

“I can confirm that, and I can say that it was not once, but multiple times where he reiterated that stance,” Meadows said.

“And he said there was no weapon off the table? Is that true too?” Hannity asked.

“That is correct,” Meadows said.