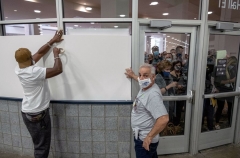 Poll workers board up windows so ballot challengers can't see into the ballot counting area at the TCF Center where ballots are being counted in downtown Detroit, Michigan November 4,2020. (Photo by JASON CONNOLLY/AFP via Getty Images)

As of Thursday morning, Trump had 50.49 percent of the vote in Pennsylvania to Democratic presidential nominee Joe Biden’s 48.36 percent with 87 percent of the districts reporting. Philadelphia is still counting mail-in ballots.

Lewandowski and former Florida Attorney General Pam Bondi are in Philadelphia overseeing the Trump campaign’s efforts to make sure “the integrity of the process” is adhered to.

“We have seen poll watchers who’ve been unable to go and actually witness what’s taking place. They're not able to see the ballots that are being opened. They’re not being able to verify the signatures. As a matter of fact, they’re being required to stand behind bike racks some 30 yards away, and the election officials here in Philadelphia are first saying it’s due to the integrity process and then after that they’re saying it’s due to the COVID restrictions in the city,” he told "Lou Dobbs Tonight."

“We know that the code restrictions here in the city require people to be 6 feet away, not bike racked 30 feet away. They're trying to steal this election, so we came to Philadelphia today to declare a victory for Donald Trump and his campaign in the state of Pennsylvania,” Lewandowski said.

“We are convinced that we have won this state. It should be in the win column for Donald Trump, and it puts us one step closer to seeing Donald Trump reelected as president of the United States,” he added.

Lewandowski said the Trump campaign sees “a pattern across this country of our people not having the opportunity to inspect the ballots as you would call it, so we have filed a federal lawsuit to ensure that that no longer occurs.”

He said they want to make sure that the ballots are counted but only those that have been “legally voted on.”

“We came in two hours ago up 500,000 votes in the state of Pennsylvania with about 86% reporting. Since that time we've seen them dump about 125,000 ballots, and Donald Trump still has an almost 400,000 vote lead in this state. At what point after 86% reporting, most of which is now even, all the big cities have reported, which means half Republican counties, half Democrats counties are yet to report,” Lewandowski said.

“We know Donald Trump’s going to win, so we had to go through the court process to ensure the integrity transpires and that people aren’t still having the opportunity to vote post-Election Day. We are vigilant in our efforts here in Pennsylvania, and Pam Bondi and I are going to make sure that every law is followed and every ballot is inspected in accordance with the law,” he said.

Lewandowski said that poll watchers are supposed to verify the postmark and compare the signatures.

“It is supposed to be, and here's what's happening right now. They’re saying the secretary of state of Pennsylvania is all of a sudden saying there's still millions of ballots to be counted. That number continues to change. When you ask what the actual number is, they say, we don't know. I don't how that's possible,” he said.

“How can you make an argument that millions of ballots need to still be counted, but when you ask for the specific number they say we don't know what the number is? We know that the city, unfortunately, has a history of fraud when it comes to elections. We’re going to make sure that does not happen,” Lewandowski said.

“We’re going to make sure that the voting has stopped and that people aren’t continuing to do that and that there’s no stuffing of ballots here. Our people have the right under the law to inspect what’s going on, not from 30 feet away, Lou, we’re happy to do it from 6 feet away, but they've conceded the fact that here in Philadelphia, we have a right to see what's going on in. They’re just trying to keep us back,” he said.

“They’re having people walk around with badges to intimidate individuals. They’re putting them behind bike rack. They’re doing everything possible to make sure that we don't verify what's really happening in this city,” Lewandowski added.