Trump Campaign Adviser: Capitol Rioters Are Not Part of the MAGA Movement 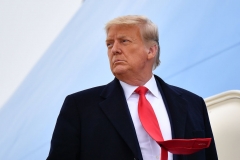 (CNSNews.com) - Jason Miller, Trump presidential campaign senior adviser, told Fox Business’s “Mornings with Maria Bartiromo” on Thursday that the people who rioted at the U.S. Capitol last week were not part of the MAGA movement or real Trump supporters.

Bartiromo suggested that Trump did not expect his speech “to rile people up in terms of what actually took place,” and she noted that some of the people who took part in the Capitol siege had come to the nation’s capital with weapons even before President Donald Trump spoke.

“Yeah, absolutely, and that's been reported out in the New York Times, that these bad actors who by the way, these are not folks who are part of the MAGA movement. These are not real Trump supporters,” Miller said.

“Maria, how thick in the head must somebody be to have watched President Trump over the last five years talking about law and order, condemning mob action, and then go and take violent behavior themselves?” he said.

When asked whether he expects Trump to run again in 2024, Miller said, “I hope so, and I’ve told him that I hope that he does. He hasn't made any kind of decision or even in private he hasn't said anything formally.

“I think he wants to make sure that he closes out what I would say is the most successful first term in presidential history, whether it be what he's done with building the wall or taking on China or Middle East peace deals, revamping the judiciary. I could go on and on,” he said.

“I know we only have so much time here, but I think when the historians in real time start looking at this administration, they're going to see such a fundamental shift of President Trump's standing up for the working men and women around the country, versus the big swamp and Big Tech and big media who want to repress the rest of the country,” Miller added.

He noted that there “couldn’t be any bigger contrast yesterday” between the House impeaching the president and Trump releasing a video Wednesday on the White House Twitter page condemning the violent riots at the U.S. Capitol building on Jan. 6.

“Here we have President Trump talking about unity, talking about trying to find common ground, making sure that he was condemning the violence last week and urging his supporters to be peaceful and go with the orderly transition next week, and on the other side, we saw the Democrats completely unhinged, completely bitter, trying to make this a referendum on the last four years, preaching division,” Miller said.

“And at this critical time, we have to come together as a country, and I think that's the important message that President Trump sent yesterday, which by the way, you talked about Big Tech a moment ago. I would still point out to viewers that Twitter, Facebook, Instagram, won't even allow President Trump to share those important peaceful words on their platforms,” he said.

When asked to assess social media’s efforts to silence the president, Miller said, “The buried lead there is that Snapchat is in business. They're going the way of MySpace. I think it’s kind of a joke by them to try to stay relevant.

Bartiromo noted that Twitter CEO Jack Dorsey wrote Wednesday that he did not celebrate or feel pride at banning Trump from Twitter “or how we got here.” He said that he made the decision to shut down the president’s personal account “after a clear warning” and that “it was based on threats to physical safety both on and off Twitter.”

Miller noted that a majority of those polled by the Republican pollster John McLaughlin said they are “very concerned” that they could be silenced by Big Tech too.

“Let’s go back to Jack’s comments for just a moment here. Let me tell you how far outside the mainstream he is. We finished up with the great John McLaughlin, the pollster, a survey of battleground state voters, 74 percent are very concerned if the big tech companies are willing to go and cancel an individual like President Trump, the president of the United States, that they might come for them next,” he said.

“The 75 million Trump supporters around the country are worried they're going to be canceled, they’re going to be blacklisted. So 70 percent think the companies need to be, whether they be broken up or anti-trust or Section 230 reforms, these companies have gotten too big, and Maria when Jack made those comments yesterday, he was lying,” Miller said, adding that Dorsey “absolutely wants to go after President Trump.

Bartiromo asked if Miller expects any legislation to remove Section 230 given that the Democrats are fine with censoring conservatives on social media.

“They know that if they go and pay lip service to him and they were able to go and step in and censor negative information about the Biden campaign, up until the election, they know they're going to be rewarded by a blind eye to their big monopolies and section 230 abuses,” Miller added.

When asked how much of the Democrats’ push to impeach the president is to prevent him from running again in 2024, Miller said, “That's entirely it. In fact in that survey I just referenced, 60 percent of voters think this is a complete waste of time, and when we talk about the fact -- you made a great point in bringing up Tom Cotton's comments that it might be unconstitutional to try President Trump in the Senate after he left office, 74 percent of voters look at that and say this is very clearly partisan, and this is just trying to keep him from running for office, but let's not stop there.”

“They're also trying to take away his presidential library. They want to strip him of Secret Service protection. They want to make sure there's no pension going into the future, and this is unbridled hatred,” he said.

“And again that contrast between President Trump putting out those powerful, peaceful words yesterday versus the Democrats who literally want to go after President Trump with only days left in his first term, and I say first term, because I very much hope that he comes back and has a second term as do many Trump supporters around the country,” Miller said.

He said that “Democrats really have to look in the mirror right now and say do we want peace or do we want further division where people go into their corners and we live in two separate countries.”