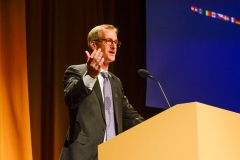 (CNSNews.com) - President Donald Trump mocked Portland Mayor Ted Wheeler for letting anarchists run rampant through the streets and even trying to break into the mayor’s house.

“I saw last night where these radical anarchists were trying to get into the mayor’s house, and lots of bad things were happening to this poor, foolish, very stupid mayor. I mean, how he could be mayor, I have no idea, but all he has to do is call and, within 10 minutes, their problem will be over,” Trump told reporters before leaving for Kenosha, Wis.

The president called Wheeler foolish for sticking up for rioters who tried to break into his residence, and he criticized the media for calling them “friendly protesters.”

“As you know, they have to call us. They have to call and request help. All he has to do is call, and the problem will end. They had tremendous numbers of people, really, harassing him horribly, and, I guess, trying to break into his house, and he still sticks up with him because he’s a fool. Only a fool would stick up for them like that,” Trump said.

“These are anarchists. These are agitators. They’re rioters. They’re looters. They’re bad people. They’re burning down Portland, and you take a look at that. You take a look at the scenes last night, and then the fake news media will say that they’re friendly protesters, because you people -- I’ll tell you, if we only had an honest press in this country, we’d be much more advanced, but we have a very dishonest press,” he said.

More than 200 people on Monday night marched to the Pearl District condominium tower where Portland Mayor Ted Wheeler lives to demand his resignation.

The demonstration quickly turned destructive as some in the crowd lit a fire in the street, then placed a picnic table from a nearby business on top of the fire to feed the blaze. People shattered windows and broke into a ground-floor dental office took items including a chair, also added to the fire, and office supplies.

Shortly after 11 p.m., a bundle of newspapers was set ablaze and thrown into a ground-floor storefront in the residential building.

Around the same time, police arrived and warned over a loudspeaker that the gathering had been declared an unlawful assembly, then a riot. Officers ordered people to leave to the west.

The 16-story building contains 114 residences — but the fire didn’t appear to spread and was quickly extinguished. Police used crowd-control munitions and released smoke into the air as they pushed the crowd west.

Trump said that “a lot of people are looking at what’s happening to these Democrat-run cities, and they’re disgusting.”

“They see what’s going on, and they can’t believe this is taking place in our country. I can’t believe it either. One of the reasons I’m making the trip today and going to Wisconsin is we’ve had such a big success in shutting down what would be, right now, a city -- that would’ve been Kenosha -- a city that would’ve been burnt to the ground by now.

When asked whether he would like to bridge the gap of the racial divisions in the country, Trump said, “Yeah, I would. I would.”

He said he thinks that what he’s been saying is helping with that because he’s “about law and order, and if you look at the black community, they want the police to help them stop crime.”

Trump pointed to the way the Obama administration handled police-involved deaths in Baltimore and Ferguson.

“Portland has been like this -- I read an article today -- for 50 years this has been going on. I’d like to stop it, and we could stop it quickly. All they have to do is say, ‘Okay, President, now we’re ready. Now we’re ready.’

When I watched that scene last night, with all of those really horrible people outside of the mayor’s house, I also saw the way they shot the young gentleman in the street. He was targeted. They targeted him. They shot him in the street, and then they were so happy, and he died. You don’t mention that. You mention somebody spray-painted somebody from the other side.

Trump accused the mainstream media of ignoring the murder of Aaron "Jay" Danielson, who was shot and killed in Portland.

“They shot a man in the street. They executed a man in the street -- a religious man, in the street, and you don’t mention it. It’s not even a story.You talk about other things. The press should be ashamed of themselves. I think the press is actually -- the media is what’s fueling this, more so than even Biden, because Biden doesn’t know he’s alive. The press is really fueling this, and they’re fueling it horribly, and you’re doing a great disservice to your country,” Trump said.

Trump said he may speak with Gov.Tony Evers, but he plans to speak with a pastor “who was talking to -- as per your question previously -- a very well involved and respected man.”

“I look forward to that. I spoke to him yesterday, by the way -- the pastor of the family, as you know, and I spoke to him yesterday. I had a great conversation. I think he’s going to be there, but I’m speaking -- really, today I’m there for law enforcement and for the National Guard because they’ve done a great job in Kenosha,” Trump said.

“They put out the flame immediately. As soon as they came in, boom, the flame was gone. Now maybe it’ll start up again, in which case, they’ll put it out very powerfully,” he added.