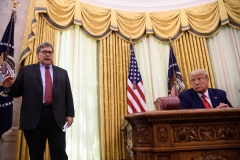 President Donald Trump listens to Attorney General Bill Barr(L) in the Oval Office at the White House after receiving a briefing from top law enforcement officials on operations against the MS-13 gang in Washington, DC, on July 15, 2020. (Photo by NICHOLAS KAMM/AFP via Getty Images)

“This week’s action by the Joint Task Force Vulcan is the most recent offense to -- we really -- this has been a big offensive in my administration’s war on foreign gangs, of which we came into this administration and we said, ‘What’s going on?’ We had gangs from countries that you wouldn’t believe. More than 20 of the criminals we indicted and arrested in the past seven days were illegal aliens,” Trump said.

“In New York and Nevada, 21 MS-13 members and leaders have been indicted on charges, including murder, kidnapping, and drug trafficking. The DOJ has also announced that it will seek the death penalty for a bloodthirsty MS-13 leader responsible for the despicable killing of seven Americans, including two teenage girls,” Trump said.

“Over the past few days, the DOJ and DHS have made several arrests at high, high levels in these cases, including several immigration arrests,” the president said.

He thanked acting DHS Secretary Chad Wolf for working along with the FBI and attorney general.

“These people murder children, and they do it as slowly and viciously as possible. We will not allow these animals to terrorize our communities, and my administration will not rest until every member of MS-13 is brought to justice. We’ve done a great job with MS-13, but now we’re stepping it up even to a higher level. This has never happened before. There’s never been any move like this before. Much of it’s already taken place. Otherwise, we wouldn’t be talking about it,” he said.

According to Barr, when he became attorney general, Trump made it clear that his top priority was reducing violent crime and specifically to take down MS-13.

“MS-13 is somewhat unique in this sense: They have the street savagery that you would see in a gang, is not driven by commercial interests the way, for example, the Mafia traditionally was. It’s about honor of being the most savage, bloodthirsty person you can be and building up a reputation as a killer. So this is, in some ways, is a death cult,” the attorney general said.

“And then they use the terror that they cause by their savagery to extort, and they’ve gotten increasingly into human trafficking and now narcotics trafficking, but that’s a sideline, to some extent, to their basic purpose, which is violence, terrorizing people. Also, unlike a street gang, they're highly organized as a transnational organization,” Barr said.

“They operate with a hierarchy, with programs -- they call them ‘programs’.’ Think of it as a crime family, essentially, and then under each program, they have different cliques. They have programs and cliques operating in the United States, while their center of gravity is in Central America. There are thousands that have come into the United States illegally,” he said.

According to the attorney general, MS-13 members are “virtually all illegal aliens.”