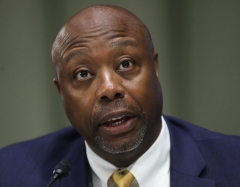 Sen. Tim Scott (R-SC) speaks during the Senate Committee for Health, Education, Labor, and Pensions hearing to examine COVID-19 and Safely Getting Back to Work and Back to School on May 12, 2020 in Washington, DC. (Photo by WIN MCNAMEE/POOL/AFP via Getty Images)

(CNSNews.com) – Sen. Tim Scott (R-S.C.) told “Fox News Sunday” that if someone hadn’t videotaped George Floyd being killed during a police arrest in Minnesota, “none of us would have known about it.”

“There's no doubt that what we're having the opportunity to see is the absolute devastation of too many African-American males, over too many decades, frankly. George Floyd, thankfully, was in a position where people were able to film it and video it, and that's why we are having this conversation,” he said.

“The Walter Scott case in 2015, had it not been for a video, it would not have happened, and when you read the police reports, you come to the conclusion that it didn't happen the way it happened until you have a video that substantiates what it is,” the senator added.

Scott also weighed in on the case of a woman in New York City who called the police on an African-American man who was birdwatching in Central Park.

“And perhaps, Chris, what we should focus on, as you said earlier, was the New York City woman who said to the Harvard black man that, ‘I'm going to call the police and say my life is being threatened,’” he said.

The senator said “there’s too much abuse within law enforcement towards African-American men.” He said he’s been a victim of it too, being stopped seven times in one year “as an elected official just driving while black.”

“It is not a binary choice, progress or regression. You can actually have both at the same time. We're seeing a lot of goodwill. We're seeing a diversity in the protests that we did not see in the '60s,” he said.

As CNSNews.com previously reported, Trump warned Minnesotans on Friday that “when the looting starts, the shooting starts:

“These THUGS are dishonoring the memory of George Floyd, and I won’t let that happen. Just spoke to Governor Tim Walz and told him that the Military is with him all the way. Any difficulty and we will assume control but, when the looting starts, the shooting starts. Thank you!” the president tweeted.

On Sunday, Trump praised the Secret Service's for handling of protesters outside the White House and warned that protesters who breached the White House fence would “have been greeted with the most vicious dogs, and most ominous weapons, I have ever seen.”

Scott said Trump’s tweets were “not constructive” – a sentiment he conveyed to the president when he spoke with Trump on Saturday morning. They also discussed the “what are the next steps.”

“Well, those are not constructive tweets, without any question. I'll say this, I spoke with the president yesterday morning, and he and I had a good conversation about what are the next steps.

“I told him what I'm going to tell you, which is, Mr. President, it helps us when you focus on the death, the unjustified, in my opinion, the criminal death of George Floyd. Those tweets are very helpful. It is helpful when you say what you said yesterday, which is that it's important for us to recognize the benefit of non-violent protests,” Scott said he told the president.

“I used similar words that you just used, which as we talked about the fact that there's a constructive way to have a dialogue with a nation, and in a similar fashion, that we had a conversation after Charlottesville. The president will listen if you engage him with the facts of the issue and then you ask him to focus on -- his attention on making progress as one nation under God,” Scott said.

“I think his tweets yesterday were far more responsive after the conversation. I'm thankful that we can have that conversation. We don't always agree. I didn't agree with some of his tweets beforehand, but we have the ability to sit down and dialogue on how we move this nation forward and not let the detractors get in the way of what has been a pretty phenomenal couple of years economically,” he said.