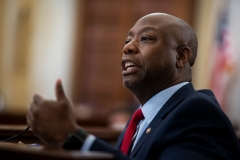 Senator Tim Scott, a Republican from South Carolina, speaks during the Senate Small Business and Entrepreneurship Hearings to examine implementation of Title I of the CARES Act on Capitol Hill in Washington, DC on June 10, 2020. (Photo by AL DRAGO/AFP via Getty Images)

(CNSNews.com) – Sen. Tim Scott (R-S.C.) told CBS’s “Face the Nation” on Sunday that one of his recommendations for police reform is “decertification of officer,” which is considered a “poison pill” by the unions.

Scott, who is working on a police reform bill, said that there are three major parts to it.

“The second thing we have to do is look at training and tactics. If we do that, we can certainly de-escalate the situation and make sure that the officer and the suspect go home. And the third part of it is officer misconduct. If we can drill into officer misconduct, we do it on a local level. The House has been talking about doing it on a state level. The president's executive order talks about doing it on a national level,” Scott said.

When asked if he was open to the including in that legislation a proposal by Democrats to reduce qualified immunity, making it easier to fire bad cops, Scott said, “Well, there are two ways that you could deal with that from the Republican perspective, and the president sent the signal that qualified immunity is off the table. They see that as a poison pill on our side.

“We could use a decertification of officer, except for the law enforcement unions say that's a poison pill. So, we're going to have to find a path that helps us reduce misconduct within the officers, but at the same time, we know that any poison pill in legislation means we get nothing done. That sends a wrong signal, perhaps the worst signal right now in America,” he said.

“I think we're going to have legislation that can be negotiated that gets us to the place where something becomes law that actually makes a difference. That's got to be our goal,” Scott said.

According to the Office of Justice Programs, “The decertification process involves the revocation of the certificate or license of a police officer who commits certain kinds of misconduct as specified by State law or administrative regulations.”
It offers several advantages over termination from a local agency.

When asked if he would be personally open to reducing immunity but not removing it completely, Scott said, “No, I think there's a way for us to deal with it. Decertification would be a path that I would be interested in looking at. That is a path that has got a roadblock, because I don't have the votes on the other side to make that into law.

“If we do it right, I think we can reduce the number of times that we're dealing with misconduct on the police departments. If we don't do it right, then we'll have the same situation where there is no law. We can do better than that as a nation, and we will,” he said.

When asked whether he thinks the officer involved in the fatal shooting of Rayshard Brooks in Atlanta used an appropriate use of force, Scott said, “Well, it seems like the mayor says it was an excessive use of force. That's really the question. The question is when the suspect turned to fire the taser, what should the officer have done?

“One of the challenges that we have in the split-second decisions is the need for more training. That's why the de-escalation aspect of my bill and the House bill is so critically important so that we don't revert back to basic fear plus adrenaline leads us to the genetic code, so to speak. That's a hard balance to achieve,” he said.

“So in order for us to provide more opportunities to de-escalate these situations and to reduce the use of force, we have to have effective training. That situation is certainly a far less clear one than the ones that we saw with George Floyd and several other ones around the country,” Scott said.

“You've talked about your own personal experiences with being targeted, stopped by police, even on Capitol Hill by a police officer who questioned whether you were a senator. Do you agree with the attorney general that there is not systemic racism in law enforcement?” host Margaret Brennan asked.

“I will say most of us don't really understand the definition of systemic racism. It changes based on the conversations. What I would suggest is that you look at the racial outcomes. Is there a nexus to race in some of the outcomes in law enforcement? I think the answer is yes,” Scott said.

“Can we reduce that so that we're no longer battling the question of the definition of systematic or systemic racism? I think the answer is yes, but there's no question that the outcomes seem to have a racial component, and that's why we're working on getting all the information, then retraining and then eliminating those police officers that have a pattern of misbehavior,” he said.