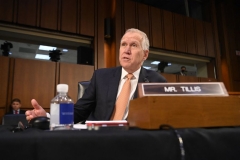 (CNSNews.com) - Sen. Thom Tillis (R-N.C.) is working on comprehensive immigration legislation with Sen. Krysten Sinema (D-Ariz.) that addressed the border crisis and provides a pathway to citizenship for Dreamers.

“We want to seal the border. We want to prevent 2 million crossings every year, and with Title 42 going away potentially many, many more than that. We want to protect our Border Patrol agents. We’ve lost one this week that was trying to go after some of the people that you just described. They’re evading Border Patrol. They’re not presenting themselves for asylum,” he told Fox News’ “America’s Newsroom” on Thursday.

“They’re trying to get to this country to continue the expansion of the cartel's illegal actions here. We want to reduce fentanyl coming across the border. We want to secure the border, and we want to make sure that the crisis at the border, that the president has to understand exists, has to be solved,” Tillis said.

Sen. Tom Cotton (R-Ark.) is opposed to proposals to give a pathway to citizenship to so-called Dreamers, who were brought to the United States illegally as children. He said that President Biden is creating thousands more Dreamers every month, and that it’s important to secure the border and prevent the flood of illegal immigrants coming into the country before addressing other issues in the U.S. immigration system.

When asked how he would change Cotton’s mind, Tillis said, “First off, Tom Cotton is a friend of mine. We disagree on this. I disagree with Tom. I think that the $800 million a year that the cartels are making for human trafficking is aiding and abetting the flood of fentanyl to this country.

“They can't have a criminal record, and they can never have been on federal -- any sort of federal assistance. These are people that came to this country as minors who are now doctors, scientists, teachers, hundreds serving in the military, and I think the American people understand this is very different than this concept of amnesty,” the senator said.

“This is going to give them a path, and it’s not automatic. They’re gonna have to work and maintain those high standards, and for that, we get a closed border, and we shut down the
cartels. That seems to me like something worth working on,” Tillis said.

When asked whether he’s had some indication from the White House whether they’d be willing to secure the border in order to get something else they want, Tillis said, “The White House is going to get what we've agreed to here and nothing more. That is exactly what I described in terms of this population.

“Again, a population that President Trump also thought had merit to give them a path to citizenship, but what the administration is going to have to accept is we’re going to fix the problem that they created. In the last year of the Trump administration, we had about a half million illegal crossings. That is manageable for Border Patrol,” the senator said.

“Now we have over 2 million, and if Title 42 goes away, that could be 3 million or more, and the Border Patrol has told me to my face that they will lose control of the border. They’re already spread thin. This is a crisis that the administration refuses to accept, and it’s one that we need to solve,” he said.