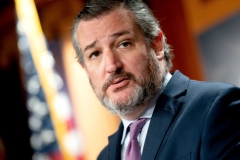 (CNSNews.com) - Sen. Ted Cruz (R-Texas) told Fox News’s “Hannity” on Wednesday that by supporting the Inflation Reduction Act, also known as the Schumer-Manchin bill, Sen. Joe Manchin (D-W.Va.) will essentially “bankrupt one of the most important industries in his entire state.”

Cruz warned that the bill will result in the hiring of tens of thousands of new IRS agents, place a tax burden on manufacturers that will be “devastating for workers” and impose new taxes and fees on the energy sector, which will drive up the cost of gasoline once again.

They’re there do descend upon middle-class workers and audit the hell out of you, and the Democrats believe if we have this army of IRS agents like a swarm of locusts from Washington, it will suddenly generate a lot of money, and they’re probably right, but I've got to tell you, I've traveled all over Texas, all over the country.

I’ve never heard one human being say of all the things we need in America we need more IRS agents. That’s what the Democrats are promising - 87,000 new ones.

The second biggest problem: manufacturing, their so-called corporate minimum tax. Fifty percent of the burden of that falls on manufacturing. What they’re doing is punishing companies for investing capital and new manufacturing lines and new truck lines and new car lines. It is devastating for workers.

The third group that is hurt is energy. There are new energy taxes and fees in this. If you're pissed off at paying more to fill up your gas tank, guess what? Schumer-Manchin makes it work worse and raises the cost of energy, and fourth, and It's what Larry Kudlow just said.

Buried in the middle of this bill are three little provisions that are designed to repeal the Supreme Court's decision in West Virginia versus EPA. West Virginia versus EPA, they said, look, the EPA doesn't have the authority to disregard the Clean Air Act and suddenly regulate carbon and drive up the cost of energy for every American in this country.

That decision was a terrific victory for democracy. What Schumer has convinced him to do is put the word carbon into the Clean Air Act. The result of that would be to bankrupt West Virginia coal miners. I've never seen a West Virginia senator literally undo the state of West Virginia’s victory at the Supreme Court and bankrupt one of the most important industries in his entire state, and yet that's what were facing right now.

Cruz said that Democrats are doubling the number of IRS agents, because many of them are “hard-core ideological socialists.”

They want more taxes, more spending. That’s all they know, and what's Amazing– listen, Joe Manchin’s a good guy. I like Joe, but to the degree to which he’s been snookered. I can’t think of– look, as a senator from Texas, if I signed onto legislation bankrupting the oil and gas industry, that’d be really damn dumb.

He just signed onto legislation bankrupting the coal industry which is a huge industry in the state of West Virginia, and it doesn’t make any sense, and here’s why the Democrats are doing this. They’re counting on the corrupt corporate media to stay silent, to repeat the White House’s idiotic talking points that this cures inflation.

Look, the cause of inflation is the Democrats’ massive spending. Their solution is to spend more and tax more. It's like throwing gasoline on a raging bonfire. It will only make inflation go up, not down, and the media won’t report on that.

It doesn’t make any sense. When Biden was elected the average price of gasoline was $2.38 a gallon. It has doubled since then, and that’s not an accident. They’ve attacked U.S. energy production. You're right.

They are encouraging Iran and Venezuela - our enemies - to produce because they don't want American energy, and it is hurting consumers, and I gotta say their Transportation Secretary Pete Buttigieg was very honest. He said the pain is the point.

The more we drive up your cost at the pump, the more you’ll do what we want, which is sell your Suburban and buy a Prius. That’s not what the American people want.