Sen. Ted Cruz to Blinken: How Many People on List You Gave to the Taliban Have Been Targeted for Torture or Murder? 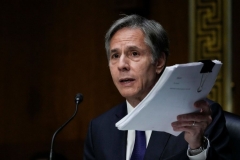 (CNSNews.com) – Sen. Ted Cruz (R-Texas) grilled Secretary of State Antony Blinken on Tuesday about whether the State Department gave a list of Americans and Afghan allies to the Taliban and whether any of the people on that list were targeted for torture or murder.

During a Senate Foreign Relations Committee hearing examining the U.S. withdrawal from Afghanistan, Cruz also asked the secretary about whether he’s seen child brides among the Afghan refugees.

CRUZ: Did the State Department give the Taliban a list or multiple lists of Americans and/or Afghans that we wanted out?

BLINKEN: Those reports and the idea that we would do anything to endanger our citizens or anyone else at a time we were trying to save their lives is flat out wrong. Let me --

BLINKEN: Let me be clear, Senator, if I may, thank you. In limited instances, where we were seeking to get a bus or a group of people through a checkpoint, we gave them manifests to the people at the checkpoint to demonstrate that those people --

CRUZ: Roughly how many names on the list you gave?

BLINKEN: Doesn't matter because they all--

CRUZ: Dozens, hundreds, thousands? Give us some order of magnitude.

BLINKEN: This happened in a handful of situations where --

CRUZ: Dozens? So it is your testimony it wasn't hundreds? I want to understand. Did you give them thousands of names?

BLINKEN: No, we did not.

BLINKEN: Not gonna put a number on it, but it was---again---

CRUZ: Why not? This is a hearing to discover, how many names and how many of those individuals you gave the Taliban the name to have been targeted for torture or murder?

BLINKEN: Senator, by definition, these were in limited instances with a bus or a group of people to get them through a checkpoint. They got through the checkpoint. CRUZ: So not only did you fail to evacuate Americans and green card holders who were there, but you also brought in tens of thousands of Afghans who had wholly inadequate vetting, bringing many of them to the United States, and one of the things that has done is that has brought in a humanitarian crisis to America.

On August 27th, according to public reports, you distributed internal documentation highlighting numerous instances at in-take centers of sexual abuse in which much older grown Afghan males appeared with children, young children, claimed they were their brides, claimed they were their wives and the document said the State Department urgently requested guidance. That was, your word, urgently.

Subsequently, Department of Homeland Security said that it showed the desperation of families that they were willing to give little girls to grown men to be subject to sexual abuse and child wives. My question is as follows: did you receive that urgent guidance? How many children have been subject to sexual abuse? What have you done to rescue young children from illegal and abusive relationships after being brought to America by the State Department?

BLINKEN: Across the entire government, everyone involved in the evacuation effort, whether it’s at a transit point in one of the countries that we negotiated with, whether it’s here in the United States, at Dulles or Philadelphia or the military bases, we have all of our officers at extreme vigilance to look for and to deal with any cases or concerns that arise --

CRUZ: Did you receive the urgent guidance? And how many child brides have you seen?

BLINKEN: I don't know the specific guidance you’re referring to. I’m happy to look at it.

CRUZ: So is there not urgency to discover if they’re being abused?

BLINKEN: We could detect and deal with many cases, and there’ve been to my knowledge, a limited number of cases where we have separated people because we were concerned that they were --

BLINKEN: The cases I'm aware of? A handful.

Cruz also said that that the Biden administration makes “political excuses” for its handling of the withdrawal, by blaming the Trump administration for its failures.

Just like Jimmy Carter owns the disaster of the Iran hostage crisis, you own this. The Biden administration caused this disaster. It was caused by two things. Number one, ideological naivety and extremism.

Repeatedly, Mr. Secretary, in this hearing and in multiple conference calls over the last month, you keep saying things like the steps the Taliban need to take to be welcomed into the community of civilized nations.

There were four decisions this administration made that I think are were utterly indefensible. Number one, abandoning the Bagram Airfield, giving it to the Taliban. That is a decision that 100 years from now will be studied at war colleges as a colossal strategic mistake giving up two secure airfields, necessitating an evacuation from a dense urban environment, a commercial airport, which led tragically to the suicide bombings and murders that killed 13 American servicemen and women.

Had we been evacuating from Bagram with a secure perimeter, the odds are quite high that attack either wouldn't have happened or if it would have happened, it would have been far less secure severe in its consequences. Secondly, the Biden administration giving the Taliban a list of Americans and of Afghans we wanted out.

Third, the decision to leave Americans behind. Hundreds of Americans, perhaps more, perhaps thousands. Thousands of green card holders, tens of thousands of Afghans who assisted the U.S. military, the Biden administration abandoned them and left them behind. And fourth, leaving billions of dollars of equipment that the Taliban will now use to threaten our lives. Earlier in the hearing, you said about that equipment, ‘None of it poses strategic threat to us or their neighbors.’ `

That does not pass the laugh test, when you're looking at the Taliban potentially having 64,000 machine guns, 33 Black Hawk helicopters, 16,000 night vision goggles. We will see American blood spilled because of these colossal mistakes. Now abandoning Bagram wasn't your call. It was the Pentagon’s and the White House's ultimately.