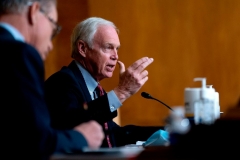 Senator Ron Johnson, Republican of Wisconsin, speaks during a Senate Budget Committee hearing regarding wages at large corporations, on Capitol Hill in Washington, DC, on February 25, 2021. (Photo by STEFANI REYNOLDS/POOL/AFP via Getty Images)

(CNSNews.com) – Sen. Ron Johnson (R-Wis.) responded Sunday to Sen. Robert Menendez (D-N.J.) calling him a racist on the Senate floor for remarks Johnson made about the Capitol riots, saying that the left is just trying to silence him.

“Unfortunately, Democrats and liberals engage in assassination of character, and they reflexively play the race card primarily to silence the critics or silence anybody that they don't want their viewpoint spread around. There's two reasons they’re silencing me,” Johnson said in an interview on Fox News’s “Sunday Morning Futures.”

“First of all, they view the Wisconsin senate seat in 2022 as vulnerable and they’d like to pick that up to completely consolidate the power so they can complete the socialization of America, but also I’m one of the few people pushing back on their inaccurate narratives that there were thousands of armed insurrectionists intent on overthrowing the government on January 6,” he said.

“I’ve condemned what happened. I condemned the breach. I condemned the violence but I was doing was I was comparing what happened on January 6 to the over 500 riots that occurred during the summer, basically left-wing that resulted in up to 25 lives lost, 700 law enforcement officers injured, one to $2 billion in property damage,” Johnson added.

“They want us to forget those riots which continue to this day and they want to silence their critics and again they do it by reflexively playing the race card. There was nothing racial in my comments whatsoever,” the senator said.

During an interview on the podcast, “The Joe Pags Show” last week, Johnson said, “Had the tables been turned and President Trump won the election and those were tens of thousands of Black Lives Matter and ANTIFA protestors, I might have been a little concerned.”