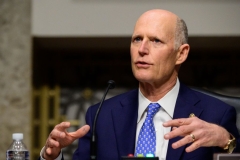 (CNSNews.com) – Sen. Rick Scott (R-Fla.) told CBS’s “Face the Nation” on Sunday that the upcoming November election will be about inflation and the effectiveness of the Biden administration, and he predicted that it will bode well for Republicans.

“I think those numbers are consistent with what we've seen, that inflation is still the number one issue in the country, and the president is slow to react, whether it's the border, whether it's inflation, whether it's gas prices, even Ukraine,” Scott said.

The senator said it’s important that Republicans talk about “what we’re going to do” and “explain the problem that the Biden administration has, that they don't react to record gas prices, an open border, things like this, but also, we tell people what we're going to do to bring down inflation. We're going to balance the budget.”

“We're going to start watching the dollars very closely. We're going to watch our spending. We are going to expect the Federal Reserve to reduce their balance sheet. So, I think we have to talk about the things that we're going to do to make it better for people, but, if you go and look at the races around the country, Biden's numbers are really, really bad, and he's -- he is the face of the Democrat Party right now,” Scott added.

When  asked if it’s a waste of time for Republican candidates to talk about relitigating the 2020 election, the senator said, “You know, what I have seen, Margaret, is people want to know that the election's going to be fair and their votes are not going to be diluted.