Sen. Rand Paul: Moms at School Board Meetings Are Being Criminalized for Dissent 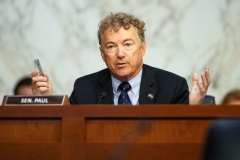 (CNSNews.com) – Sen. Rand Paul (R-Ky.), who was accosted by Black Lives Matter protesters while he was with his wife, said Wednesday that the DOJ is criminalizing parents who show up at school board meetings angry over mask mandates and critical race theory curriculum in schools, but protesters on the left who use violence are getting off with a slap on the wrist.

“You know, both my wife and I have been through a lot. Not only being myself being shot at, the ball field when Steve Scalise was nearly killed, being there when a mob of 100 surrounded us, threatening to kill us, holding us essentially hostage until policemen came and broke us free,” the senator told “Fox News Primetime.”

“They were assaulting the policemen as they were trying to get us to the hotel. One of the policemen was ultimately bloodied and had a laceration that required stitches above his eye. They arrested that one person, but that person was then released on their own recognizance the same night for assaulting a police officer, released the same night,” Paul said.

“To our knowledge, he’s still not been tried for this crime. I say good luck on finding him. We asked them to investigate the mob of 100 to see who paid for them to come to D.C., who was putting them up in thousand-dollar a night hotels? Not one thing was ever done by the Department of Justice, but now moms at school boards are being, you know, told that they're criminals, potential domestic terrorists for the crime of dissent. I think criminalizing dissent is something that we should all be appalled with,” he said.

Host Ben Domenech pointed out that 20 years ago, there was “a great deal of rage on the left” after 9/11 over concerns that the Patriot Act and other steps might be used to silence dissenters or violate American privacy. The left seems to be in favor of that today, he said.

“Well, I think the problem is it's become so normalized to use government to search out and seek out your opponents. So for example, when FISA warrants, which are supposed to be foreign intelligence surveillance court warrants - they’re supposed to be used on foreigners - were used on Trump campaign and Trump campaign operatives, the left didn't blink an eye,” Paul said.

“There are people I know on the left who should have stepped forward and should have said how wrong it is to use this foreign intelligence court that uses a standard lower than the Constitution to go after a political campaign. Yet, the left, once it became about Trump, their hatred of Trump trumped everything else. I have a feeling and a fear that the left has become more authoritarian that we can really even imagine,” he said.

“Matt Taibbi writes for the Rolling Stone I think from a left-wing specific probably, but he’s a good journalist. He writes about how we used, to the left used to be proud of skepticism and questioning authority and how the left now has become more like, you know, Plato's sort of concept that, you know, obey the experts, and if you don't, we should censure out dissent. This is a dangerous trend I think for the country,” the senator said.

Domenech said there are probably people who are concerned that if they go their local school board and say the wrong thing, they might end up on some list that Attorney General Merrick Garland goes after.

When asked what he would say to those people, Paul said, “I would say be afraid. Be afraid of your government, and that's a sad thing from someone in the government to say, but the thing is those lists already exist.”

“For example, people in northern Virginia that have gone to, have been then sought ought by the school council, by the members of the school board and retaliated in a sort of legalistic way to try to put them on some sort of list and chill their speech by letting them know there will be a penalty for showing up and protesting,” the senator said.

“Look, there are all kinds of laws about decorum, and there ought to be. You know, the idiot woman that goes in the bathroom filming Senator Sinema in a bathroom, that is illegal according to every local ordinance, and you should punish that person,” he said.

“If you go to a school board meeting, and you’re disruptive, and you don't obey the rules of the school board meeting, then there will be local punishment, but it has nothing to do with the federal law. It has nothing to do with the Department of Justice. What Merrick Garland did, is he’s attempting to stifle dissent, and he’s attempting to say beware or big brother is coming after you if you speak out against my policies or against the Biden policies,” Paul said.