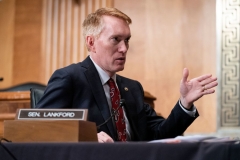 (CNSNews.com) - Sen. James Lankford (R-Okla.) told Fox Business’ “Mornings with Maria Bartiromo” on Wednesday that it’s “not acceptable” to say that the 18-year-old Uvalde school shooter is going to “wipe out gun ownership across the country” for “responsible gun owners.”

“We all have incredible grief in this. Let me first say thank you to folks in the Border Patrol community and the local law enforcement that responded incredibly rapidly in this situation to be able to engage the challenges of how you deal with a needle in a haystack at this point,” the senator said.

“There are millions and millions of gun owners in America, and to be able to say this one 18-year-old is now going to wipe out gun ownership across the country is absolutely not acceptable for the responsible gun owners that are out there that are trying to identify why this 18-year-old went and buys guns for his 18th birthday, shoots his grandmother, and then goes to elementary school and kills 7-year-olds. He’s irrational and unthinkable in so many ways,” he added.

On illegal immigration, Lankford said that despite what DHS Secretary Alejandro Mayorkas says, the southern border is not closed.

The senator said that leaders in Central America are frustrated with the United States’ open border, because it encourages their best workers to leave their country and come to the United States.

“Literally, if you cross the border and to say I have fear in my country, they’re allowed in, and right now, the Biden administration is giving them a piece of paper that says you can stay in the United States for eight years, if you illegally crossed the border,” the senator said.

“So that incentivizes more people to be able to come when they know they’re going to able to get into the United States and be able to remain for eight years, so it’s just irrational what’s actually happening there, and the big story yesterday would have been the fact that we had people illegally cross our border in an assassination attempt on President George Bush, that had illegally crossed border,” he said.

“Obviously, the Uvalde story is a much bigger story on this point, but we have people that are crossing the border for all kinds of nefarious reasons, and it needs to be addressed,” the senator said.

Lankford said that the drug cartels are now running the southern border.

“We absolutely do know the drug cartels running that area. Those same cartels that are moving people. That’s estimated around 10 billion dollars that the cartels in Mexico made last year from just human trafficking into United States,” the senator said.

“So it is a frequent thing to be able to run into people there that paid $4,000 to $30,000, to the cartels to be able to illegally cross the border. We are facilitating this activity by keeping the border open as we are and so it’s continued to empower the cartels who just keep sending people,” he said.