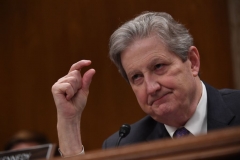 (CNSNews.com) – Sen. John Kennedy (R-La.) told Fox News’ “Your World with Neil Cavuto” on Friday that while there’s no law saying you have to wear a mask, he wears two masks when traveling by plane and one everywhere else because he doesn’t want to die.

When asked whether President Donald Trump and his cabinet are setting a good example by not wearing a mask, Kennedy said, “We don't have a law that you have to wear a mask. I mean this isn’t China. If you don't wear a mask, you’re not going to be banned and thrown into Shawshank prison, but all I can do is say what I do.

"I don't wear one mask. I wear two when I'm on an airplane, and I wear one everywhere else. I think a mask it does protect other people. I think it protects you,” the senator said.
As far as the spiked in coronavirus cases, Kennedy said, “A lot of it was predictable. Some of it is additional testing. We're discovering more cases because we're doing a better job of testing, but that's not the only reason.

“We opened up the economy, and people are moving around more. Some of this was predictable, but the real reason that I think that the cases are spiking is because people aren't taking precautions. You've got to wear a mask. You gotta to stay 6 feet apart. You gotta to wash her hands your hands,” the senator said.

“If we did a better job of following the, what the experts, the health experts are telling us, it wouldn't eliminate the virus, but it would control it. We also got a lot of problems with young people. I got a 24-year-old son. He thinks he's bulletproof. He thinks he's going to live forever. They gotta do a better job. I'm very proud of my son,” Kennedy said.

“I'm proud of my son. He went to college, and he's got no visible tattoos,” he said.