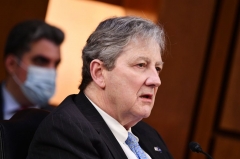 “This is serious business. This is not some academic frolic. People’s lives are at stake. His agency, he gave money to the Wuhan lab that was playing around with this virus. He needs to tell us everything he knows about that. What did they use the money for? What could they have used the money for?” the senator said.

“He says they didn't do gain-of-function research. Gain of function just means they might have turned a benign harmless virus into a killer, and he said, well, they didn't use my money to do that. Well, how do you know? What other labs has he and his agency given money to in China or in the United States? Who else is doing this research trying to create Frankensteins?” he said.

“President Biden as we’ve now found out has disbanded President Trump's task force that was trying to get to the bottom of wherever the virus came from. Dr. Fauci says he didn't know anything about it. Now I’m not saying he did or didn't, but he needs to be candid, and when he found out, why wasn't he on the phone to President Biden raising fresh hell?” Kennedy asked.

“I understand Dr. Fauci doesn't like former President Trump that much. This is America. He’s entitled to believe what he wants, but that's irrelevant to me. We’ve got to find out where this virus came from so we can stop it from happening again, and If the Chinese are playing around with viruses, turning them into deadly killers, especially with our money, we need to know, and we need stop it,” he said.